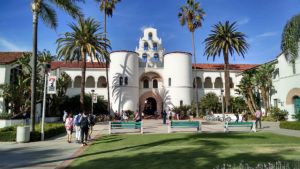 For a university that repeatedly claims they have done nothing wrong, that they handled the rape accusations against three football players perfectly, SDSU officials surely act as if they have something to hide.

First, while President Adela de la Torre defended SDSU’s actions in an opinion piece as well as a letter to the editor of the San Diego Union Tribune, she twice refused to speak with journalists about this matter.

Before the Los Angeles Times broke the story on June 3, the reporters approached de la Torre for comment, and they were told no, the president would not speak with them: “A university spokeswoman said De la Torre was not available for interviews for this report.”

Then, on July 29, the LA Times printed the victim’s account of her rape, and once more: “A San Diego State spokeswoman said Friday that university President Adela de la Torre was not available for comment.”

To state the obvious, de la Torre is perfectly available when it comes to the Mission Valley project, Snapdragon Stadium, or expanding the Imperial Valley Campus. But a university president also has to confront bad news as well the good. It’s not all happy talk. And by refusing to speak to the press about this incident, she gives the impression that she’s avoiding hard questions, that she is neither accountable nor transparent.

That’s not a good look for a public university president.

SDSU gave further evidence that they were more interested in controlling the narrative than providing substantive answers when on Aug. 3, football coach Brady Hoke, during a Zoom call with media, vowed “full cooperation” with the investigation. After Hoke finished reading from his prepared script, a reporter asked, “Coming into this year, what steps are you taking to make sure that things like this aren’t happening this year with your players?”

Hoke started to answer, but then, he was interrupted by an Athletic Department media relations official, who reiterated that “as Coach mentioned, he cannot share any details at this time and I direct you to the public website providing information about the off-campus incident and the actions the university continues to take.”

Hoke could have responded that SDSU brought in Brenda Tracy, a sexual assault survivor and now educator on the topic, to speak with the football team as well as other athletes. But that story broke only a few days ago. Apparently, SDSU did not want Tracy’s presence or the reasons for her coming to campus known beyond the Athletics Department.

Again, not a good look.

Then, on Monday, Hoke and Athletic Director John David Wicker held a news conference to celebrate the opening of their brand-new stadium. Both Hoke and Wicker read prepared statements about the rape allegations and the civil lawsuit filed by the victim. Unsurprisingly, reporters wanted to talk about that. But Hoke and Wicker did not. Rather than face questions and accountability, they walked out. Here’s a video.

True, after fifteen minutes, Wicker and Hoke returned and answered a few questions. But the damage was done, resulting in such headlines as:

As one might expect, the fans did not react well to this spectacle. One, for example, tweeted: “You can have a prepared statement about not taking questions, but the reporters present don’t work for SDSU and the questions they’re asking are important. Face it.”

Instead of answering questions openly and honestly, SDSU’s officials have refused outright to speak with reporters, hid behind prepared statements and PR flacks, or walked out when reporters asked impertinent but probing questions.

When accusations of rape involving a star football player surface and the investigation is delayed, there’s going to be the appearance of giving the athletes favorable treatment. Especially when the football team is enjoying a winning streak, one of the players is about to drafted into the NFL, and a new stadium is about to open. The last thing the Aztecs need is a scandal.

But instead of dispelling suspicion, the university consistently acts like it wants to bury the story.

For example, according to SDSU’s timeline on their Title IX website page, they claim that they first heard about the incident from the San Diego Police Department:  “SDPD received a report of an off-campus sexual assault. SDSU was first notified of the incident and SDPD’s investigation on Oct. 19, 2021.” They also claim they did not know the victim’s name, a claim they repeated throughout the summer.

And yet, the victim’s father told CBS 8 that he had told the University Police Department on Oct. 19 about the alleged rape, “speaking face to face to a lieutenant as the officer took written notes, and he gave the lieutenant his daughter’s name.” Also, is it credible that the lieutenant’s report would not make its way up the chain of command?

The university also repeatedly asserts that their hands were tied because the police asked them not to proceed further “to ensure that the criminal case was not compromised.” But others, including the woman SDSU brought in to educate athletes about sexual assault, have said there was no reason to delay. On Aug. 28, Tracy released this statement:

“As I read more and more of the details of this case, it is becoming more obvious that SDSU did not do the right thing. Institutions should not defer to police investigations . . . . Title IX and criminal cases can run concurrently. They are separate processes and the school’s obligation is to prioritize student safety. Even without the victim directly reporting to the school, her father did, and the school could have reached out to him. Anonymous tips, one of which included a name, should have been followed up on immediately.”

SDSU could not have done a worse job of handling this terrible incident. Instead of making themselves available to the press and answering questions, they have ducked, weaved, and hid important information. Consequently, the story has only grown larger and gone international. The Daily Mail, a British tabloid, has run not one, but two stories on the rape accusations (here and here).

By hiding behind prepared statements, not addressing inconsistencies in their narrative, refusing to talk to the press, and walking out on a press conference, SDSU’s officials, including the president, have only magnified the story to the point where it’s now a major scandal. Even more, SDSU’s administrators have undermined their credibility and ruined whatever trust existed between themselves, the fans, and everyone who works at or attends SDSU.