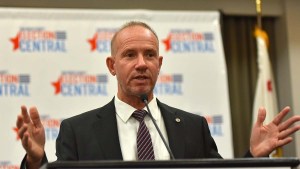 John Hemmerling announced in May that he had retired immediately as head prosecutor of the criminal justice division in San Diego’s City Attorney’s Office. He abruptly resigned the day after The San Diego Union-Tribune editorial board rescinded its endorsement of him in the San Diego Sheriff race over controversial remarks he had made about transgender women at an April town hall meeting in Ramona.

Hemmerling left his $204,000-a-year job after seven years with the office saying not very credibly that he did so to focus full time on the election, one where he trails badly in the polls.

As a plastic surgeon that has performed hundreds of gender affirming facial and body surgical procedures on trans men and women, I was disappointed but not surprised by Hemmerling’s remarks. Transgender men and women are perhaps the only group that still faces overt discrimination on a daily basis.

A kick in the teeth of a minority group by an unpolished politician trying to mine a few extra votes should serve as no surprise to those who work on a daily basis with the trans community. Young trans men and women face overwhelming obstacles to achieve acceptance in their families, their jobs and their communities.

I have seen many young trans patients who engage in self-injury or “cutting” in an effort to cope with emotional pain and frustration.  I had one patient who didn’t show up for a procedure and found later that she had taken her own life over the weekend.

The lucky ones show up at my office with proud and supportive parents at their side; some of them attend Ivy League schools and graduate programs. Many of the unlucky ones were thrown out of their homes as teenagers and lived on the streets before being taken in by friends or a sympathetic older sibling.

Some are victims of hate crimes. Often I find that my trans patients live on the knife’s edge, a precarious place where the slightest misstep can cause the loss of a job or a stable living environment. Fortunately, older patients have often already achieved some degree of job security and social stability.

One who works as a criminal appellate attorney to help overturn unjust criminal convictions has worked on at least one case that Hemmerling’s office prosecuted.

The hammer came down on Hemmerling over statements that he made warning that the county Board of Supervisors had passed an ordinance that “redefined what a woman is.” Those supervisors, he said, would be the ones directing the new sheriff “to enforce that out here, allow those men to go to the women’s bathrooms, right? That’s what I’m saying.”

This ordinance, The Convention on the Elimination of all Forms of Discrimination Against Women, is an international treaty adopted in 1979 by the United Nations General Assembly and has been ratified by 189 of 195 member states including other cities in California such as Los Angeles and San Francisco.

According to the United States Supreme Court, in the Bostock ruling June 15, 2020, discrimination on the basis of transgender status is also discrimination because of sex.

After the Union-Tribune rescinded its endorsement, Hemmerling explained that his “sole intent was to express concern about the overbroad nature of the Board of Supervisors’ recent ordinance,” concerns that none of the 189 countries in the world excluding Yemen, Somalia and Sudan have shared with Hemmerling.

Though Hemmerling’s philosophical predecessors may have protected their anonymity by cutting eyeholes into white bedsheets, Hemmerling sought to do so by tossing red meat to followers in a town forum where he likely thought his hateful speech would not be widely publicized.

The Union-Tribune editorial board surmised that denying transgender people their very humanity is a disqualifying trait for a sheriff.  It should be similarly stated that John Hemmerling is not only unfit to be sheriff but also likely recognized that he was unfit to lead any division at the City Attorney’s office and simply quit. Good riddance.