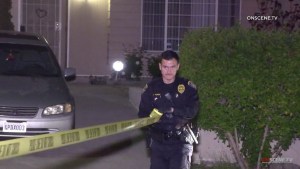 An officer puts up crime scene tape at the site of a stabbing in Otay Mesa. Photo via OnScene.TV.

One way to help reduce crime in San Diego is to hire more police officers, build more jails, increase penalties, and incarcerate criminals with long jail sentences. But these are just short-term fixes.

Another approach is to make mental health services and treatment more accessible and a good place to start is in our public schools. Most kids entering juvenile detention have mental health disorders that often go unseen and untreated. So, addressing and treating those with mental illness early will help to reduce crime in the long run.

Children with mental health challenges enter a juvenile justice system that is ill-equipped to assist them. Between 65% and 70% of the 2 million adolescents arrested each year in the United States have a mental health disorder. Approximately one in four suffers from a mental illness so severe it impairs their ability to function as a young person and grow into a responsible adult.

Without treatment, the child may continue on a path of delinquency and eventually adult crime. Some 37% of adults in the state and federal prison system have a diagnosed mental illness, and a third of the inmate population in San Diego County has some form of mental illness that requires medication.

There has been a 10% increase in violent crime and 13% increase in property crime in San Diego. That, coupled with a reduced number of police on the streets and weak laws such as Proposition 47, makes the residents of San Diego less safe.

To decrease crime, we need to focus on long-term solutions like making mental health services more available to students. To combat the escalation in crime, more mental health care professionals are needed in our public schools to facilitate students with mental health issues.

The relationship is clear, and the statistics confirm it, that a majority of young adults arrested struggle with mental health issues. This year California public schools received record funding that prioritized mental health and yet San Diego County schools still lack the personnel and resources to adequately attend to students with mental illness, so many kids will simply fall through the cracks and remain untreated.

San Diego is the 8th largest city in the United States, so we cannot afford to be reactive to crime. Educational leaders, law enforcement personnel, politicians, county health officials and all other stakeholders need to work in unison to craft a comprehensive crime-reduction plan that includes addressing student mental health. A multipronged approach to addressing crime is vital and must include hiring more police officers, amending weak laws, increasing prison sentences for violent criminals, and providing mental health services to youths.

The link between incarceration and mental illness is well established and thoroughly documented. So, failure to include student mental health as part of a comprehensive crime reduction strategy is ill-advised.

To prevent future crime, identifying and treating student mental disorders as early as possible must become one of our top priorities, and schools are in a perfect position to do so.

Mark Powell has a bachelor’s degree in criminal justice administration and a master’s degree in educational counseling. He is a former reserve officer with the San Diego Police Department and president of Parents For Quality Education.