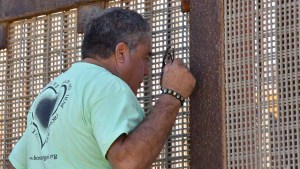 Enrique Morones, founder of Border Angels, speaks through the fence to Mexican citizens at Friendship Park. Photo by Chris Stone

I have been going to Friendship Park since the mid-1990s, first to attend the Posadas Sin Fronteras initiated by Roberto Martinez and Friar Ed, then to attend the binational masses led by Father Henry and Padre Luis.

Later, various organizations, including Chula Vista High School, started the binational garden. Then, we had binational concerts that included performances by the San Diego Symphony and Baja California Orchestra, as well as mariachis on both sides of the wall.

We also had theater with “Letters from the wall,” sports soccer clinics and 5K runs, and meditation and yoga without borders. There were tributes to veterans, the painting of the wall, wedding ceremonies, and even the opening of the “Door of Hope” six times.

Although Friendship Park is not the only location where families meet along the 2,000-mile border, it is a sacred place. We should reopen it to all visitors as it should have always been.

Friendship is much more than a park. There is a 700-mile wall of shame, a wall of death that covers one-third of the U.S.-Mexico border. What does that say to a country that the United States invaded and captured territory from during the war of 1846-1848?

What does it say to our neighbors who were not consulted about the wall or the park? What does that say to the 12,000 families that have lost loved ones due to the wall?

I have traversed the entire border in both countries several times. I have been to the northern border and visited Friendship Arch between Canada and the United States

I have been to the Berlin Wall, the Great Wall of China, Israel’s wall, and the wall that separates Ireland from Northern Ireland.

Walls not only divide, but they also kill. They do not consult with neighbors, they oppress them.

I have met directly with several U.S. and Mexican presidents on many of these issues and have led many of the above-mentioned actions.

I have met with the national and local immigration leaders in both countries and will continue to do so.

I am extremely concerned about the divisions between and within both countries.

Walls do not make good neighbors; they create confrontations. It is time we practice what we preach. Let us pass a humane immigration reform and extend a hand of partnership, not a fist of fury. Love has no borders.

Enrique Morones is the founder Border Angels, the House of Mexico and Gente Unida.