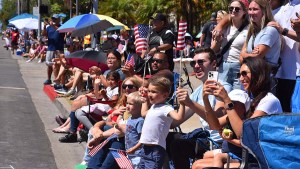 Spectators at the Coronado 4th of July parade 2022. Photo by Chris Stone

On July 4th every year, little Coronado sponsors what may be the best Independence Day parade west of the Mississippi. And so it was last Monday, before the tragedy in Illinois.

Even expatriate Americans join in. In Mexico City, the American Society puts on a huge picnic with thousands of people attending.

Once, when my daughter was five, we spent the 4th at a resort hotel in Loreto on the Gulf of California. The hotel put on a fireworks show, brought in mariachis and folklorico dancers, and distributed free margaritas to celebrate America’s independence.

This year’s 4th of July was different. The holiday’s special place in our minds and hearts may have been changed forever by a young man with an assault rifle in Highland Park, a prosperous Chicago suburb.

He murdered seven and seriously wounded over 30 people who were just watching the parade. Victims ranged from 88 years old to a child of six. He used a military-style, semi-automatic assault rifle he legally bought locally.

To make his escape easier, he wore women’s clothing in order to blend in with a panic-stricken crowd. He left the murder weapon on the roof from where he shot everyone. That allowed federal officers to track the weapon within minutes once it was recovered.

The suspect was arrested a short time later because police knew his name — from the rifle purchase — and were familiar with him and his vehicle.

Kudos to the local, state and federal law enforcement officers who had the suspect in custody, face down on a street in short order.

What those officers did reminds us of how sloppy, cowardly and stupid a gaggle of Texas law enforcement officers were by standing around doing nothing while children were being slaughtered by another young shooter who also bought guns legally and used them to murder.

We can put drones on Mars and we can walk on the moon, but we can’t stop young killers from buying guns legally and slaughtering people in schools and neighborhoods. Even while watching Marines parade on the 4th of July.

It’s a recurring tragedy for which we must find an answer.