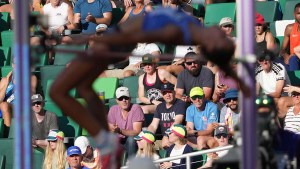 The World Athletics Championships in Eugene, Oregon, which ended last Sunday, were what American track and field fans have dreamt of for years.

Despite being the dominant global force in the sport for decades, the United States has never hosted the outdoor world meet, the sport’s biggest competition outside of the Olympics, since their inception in 1983. It’s been largely due to logistical reasons — for many years, America didn’t have a stadium with a track, facilities and other amenities needed to host a meet of this stature.

Then came the force of will of Phil Knight, the billionaire founder of Nike. A former runner at the University of Oregon, Knight led a group of investors to pour $270 million into renovations to Hayward Field — the mecca of track and field in America, much like Madison Square Garden is for pro basketball.

Glimmering new Hayward was packed full of knowledgeable and passionate fans ranging from local Oregonians to people from every corner of the globe cheering on their compatriots. The rhythmic clapping and loud roars heard throughout the week were a dream come true for U.S. fans who have fantasized about witnessing a competition like this on home soil.

All of this is great news for those of us who are already track fanatics. But these championships were hyped up to do more.

In the lead-up to the competition, track and field’s governing organizations promoted this event as a sort of prequel to the 2028 Los Angeles Olympics. In pieces written in the Washington Post and Los Angeles Times, the likes of World Athletics president Seb Coe and USA Track & Field CEO Max Siegel hyped the meet as a prime opportunity to grow the sport’s fan base by showing America the very best of track and field on home soil.

With the championships now concluded, it’s only fair to ask: Were their ambitions met?

The evidence so far is a mixed bag.

The first weekend of worlds averaged 1.97 million viewers on NBC — higher than all previous World Championships broadcasts but nearly 40% lower than the viewership of the Olympic Trials last summer.

NBC’s affiliates in Los Angeles and the San Francisco Bay Area — the second- and sixth-largest media markets in the U.S. — both didn’t air the U.S. sweep of the men’s 100-meter final live. I’ve seen and heard anecdotal accounts of similar issues in cities like Las Vegas and Salt Lake City. And the fifth day of competition wasn’t broadcast on U.S. television at all — only on NBC’s streaming platform.

While it’s great that 150,000 diehard fans in Eugene had an amazing experience at the track, we can’t fool ourselves into thinking that alone is going to cut it if we’re to garner wider appeal for the sport. Track and field has to meet people where they are — on their smartphones, television screens, and in local news outlets.

There are track and field specialty outlets doing a stellar job telling these stories. But their reach in the hundreds of thousands can’t possibly match that of mainstream news outlets. And due to NBC’s monopoly on broadcasts of track and field and other Olympic sports, the other behemoths of sports media like ESPN and Fox Sports have little incentive to promote track like they do other sports that they bid billions of dollars for the rights to show their games.

Track and field isn’t short of great stories and personalities — they just need to be told outside of our narrow bubble. As Michael Johnson put it last week: “Our problem isn’t great athletes. Our problem is no one knows how great they are.”

If we’re to see the sport expand its fan base significantly prior to LA 2028, it’s going to take more than a single World Championships on U.S. soil — instead, bigger and bolder thinking by the best and brightest in the sport. I’m hopeful they can get it done.

Kevin Liao is a Washington, D.C.-based writer, political consultant and amateur runner. He is a graduate of UC San Diego.