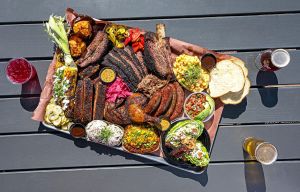 Heritage Barbecue, a craft barbecue restaurant based in San Juan Capistrano, will expand to San Diego County to open its second location.

“Our family just moved to Oceanside and we already love it here,” said pitmaster and co-owner Daniel Castillo. “The community is home to so many amazing emerging concepts, we felt this would be perfect for the next chapter of Heritage Barbecue.”

Set to open by year’s end, the new Heritage Barbecue & Brewery naturally will offer barbecue, along with craft beers and cocktails.

Heritage will take over a space of nearly 10,000 square feet that was vacated by Municipal Taco, which closely abruptly June 21. Urge Gastropub also once used the site.

The property, at 2002 S. Coast Hwy., will feature 18 taps, a full bar and an indoor/outdoor setting.

“We didn’t want to create just another Heritage Barbecue, we wanted to set this new venture apart and really create a craft barbecue brew-pub type of destination,” Castillo said.

He added that the beer, all brewed onsite, will be made “in-house to specifically complement our uniquely SoCal-style of craft barbecue.”

Heritage Barbecue favorites include the Texas Trinity of smoked brisket, house-made sausage and ribs, in addition to specialty items such as Brisket Banh Mi, Pastrami Tortas and more.

Other featured menu items include chips and queso, chili fries and dogs, smoked burgers and a shifting Daily Platter of select meats.