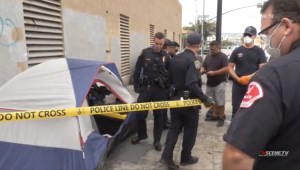 Two men were found dead in a tent on the outskirts of the East Village Friday morning by pedestrians, and authorities suspect drugs as a factor in the deaths.

The two pedestrians summoned aid to the 100 block of 16th Street around 9:30 a.m., but medics found it was too late to attempt to save the men, according to OnScene.TV.

Police do not suspect foul play, OnScene reported. Drug overdose are believed to be the preliminary causes of death.

The block is east of Petco Park and north of a neighborhood with multiple agencies that offer services for homeless people.