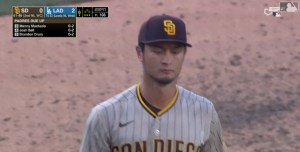 Yu Darvish leaves the field after striking out Freddie Freeman looking in the Padres 4-0 loss to the Dodgers. Photo credit: Screen shot, mlb.com

The Padres, who eagerly noted the energy newcomer Juan Soto brought to the club, didn’t feel it this weekend as red-hot Los Angeles swept the Friars with a 4-0 win Sunday.

Yu Darvish gave up two runs in six innings of work, including Bellinger’s first blast. But with the Padres‘ offensive effort limited to third and sixth inning singles by Ha-Seong Kim and Jurickson Profar, and two walks to Soto, Darvish had little chance to be picked up by his teammates.

The Dodgers won their eighth straight, and saw their National League West lead swell to 15.5 games over the Padres. The Friars have dropped 17 of their last 19 to L.A. dating back to last season.

“Any way you slice it up, it’s not what we were looking for,” manager Bob Melvin told the media Sunday.

We hope Trea Turner can forgive Juan Soto for this one.

The Padres also lost 8-3 Saturday. Their attention has shifted to the wild-card race, where they are hanging onto the third and final spot, behind the Philadelphia Phillies, who have won five in a row.

Meanwhile, Fernando Tatis Jr. played his second game in Double-A San Antonio Sunday. He has yet to get a hit in five at-bats during his rehab stint, and has played shortstop and served as DH.

The team remains circumspect about setting a proper date for Tatis’ much anticipated return, but Melvin committed – sort of – to “mid-August-ish” timeframe to MLB.com.

The Padres come home – but don’t wait for the weekend – for a three-game series with the San Francisco Giants before hitting the road again. Blake Snell, Joe Musgrove and Sean Manaea take the mound at Petco Park.