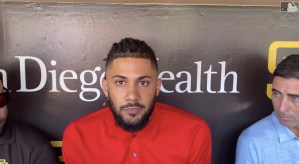 The Padres had a difficult end to their home stand, dropping two games to the visiting Cleveland Guardians and meeting anew with their tarnished young star Fernando Tatis, Jr.

Blake Snell faltered again Wednesday after his hot mid-summer run, as he gave up six runs in Cleveland’s 7-0 shutout of the Padres. That followed the team’s 3-1 Tuesday loss, charged to Mike Clevinger.

Despite the setbacks, the Padres continue to hold on to the third National League wild-card spot, with the Milwaukee Brewers on their heels.

Offensive consistency continues to be an issue for the Padres, as Wil Myers put it bluntly to MLB.com, “At the end of the day, that’s what it is. We’ve got to find a way to drive those runs in.”

It’s more difficult to do so without one of the main cogs in the lineup, and the Padres had been without Tatis all this year due to his wrist injury, and will be the remainder of the season and a good chunk of the next due to his 80-game PED suspension.

According to MLB.com, Tatis apologized to his teammates in a Tuesday clubhouse meeting, and expressed his public apologies as well, beyond the statement released Aug. 12, the day his suspension was announced.

“I know I have a lot of love I have to gain back, and I have a lot of work to do,” he told MLB and other media gathered at Petco Park. “It’s going to be a very long process to gain everybody’s trust.”

He also apologized for the off-season escapade that caused his wrist injury, saying if he had it to do again, “in the first place, I wouldn’t have gotten on the motorcycle.”

Ultimately, according to MLB, Tatis emphasized “that I’m going to take better steps moving forward, that I was going to make sure that all of this never happens again.” He further explained said he took the banned substance, Clostebol, unknowingly, as part of a treatment for a skin condition, without stopping to check with team doctors.

“It was me being reckless,” he said, according to MLB.

Veteran Joe Musgrove noted the difficulty of facing the team after his mistakes.

“For him to come in and face the team, face-to-face, and be honest with us and let us know what happened, that’s what everyone wanted,” the El Cajon native said.

After an off-day Thursday, the Padres return to the road to face Kansas City, San Francisco and Los Angeles. The Friars have yet to announce starters for the Royals series.