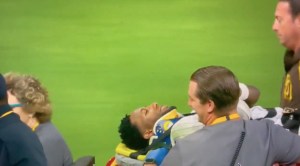 Jurickson Profar appears alert and in good spirits as he is taken off the field at Petco Park after collapsing Thursday. Photo credit: Screen shot, @JimRussellSD via Twitter

The Padres won in dramatic fashion Thursday, but the result took a back seat to Jurickson Profar’s health.

The left fielder collapsed in the fifth inning of the Padres 2-1 win over the San Francisco Giants at Petco Park after colliding with shortstop C.J. Abrams. They had been pursuing a pop up off the bat of Tommy La Stella and both went down.

Profar appeared dazed, but got up. Yet as he began to return to the dugout under his own power, he crumpled to the ground as he neared the infield. Trainers and players rushed to his aid and eventually, he seemed alert, even acknowledging the crowd by raising his arm from his stretcher.

The Padres provided this update via Twitter at 9:19 p.m.: “Jurickson Profar has been transported to UC San Diego Health for further evaluation. We will provide additional updates when available.”

Jurickson Profar was carted off the field after taking a knee to the head by his own teammate C.J. Abrams

Manager Bob Melvin told reporters after the game that it was “an awful feeling” to see Profar taken off by medics, but said his player’s positive attitude – he even smiled – was a comfort. He never lost consciousness.

“What we’re worried about most is probably a concussion at this point,” Melvin said.

Until the top of the ninth that is. The Giants forced the game into extras on Brandon Crawford’s single to drive in Austin Slater for the 1-1 tie, costing Musgrove his ninth win.

Jorge Alfaro, though, came up with the bases loaded in the 10th and singled to drive in Ha-Seong Kim for the 2-1 walk-off win.

The series resumes at at 6:40 p.m. Friday when Blake Snell takes the mound.