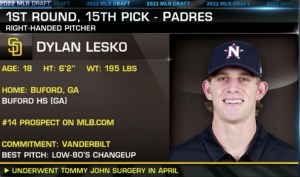 The Padres focused on mound needs with their Sunday picks, leading off with high-school pitcher Dylan Lesko, the No. 15 selection in the MLB Draft, which began in Los Angeles.

Lesko, 18, though, out of Buford High in Georgia, had Tommy John surgery on his right elbow in April, so he will have to log some recovery time.

Nonetheless, the prospect maintained his position among the top possible picks compiled by MLB Pipeline.

The Padres added two other pitchers later Sunday, another high schooler and a college hurler.

In his last full season, as a junior in 2021, Lesko had a perfect 11-0 record with a 0.35 ERA and 112 strikeouts. He also became the only junior to win Gatorade National Baseball Player of the Year honors.

As for the young man’s future, MLB cited stars Lucas Giolito and Walker Buehler as recent examples of prospects who had early major surgeries like Lesko, yet have thrived.

The recent graduate, though, does have college plans, at Vanderbilt, should he not sign with the Padres.

The Baltimore Orioles had the No. 1 pick and drafted Jackson Holliday, the son of former major leaguer Matt Holliday.

In addition, the St. Louis Cardinals used their No. 59 pick University of San Diego junior Brycen Mautz – on the lefty’s birthday no less. The pitcher turned 21 Sunday.

The draft continues through Tuesday.