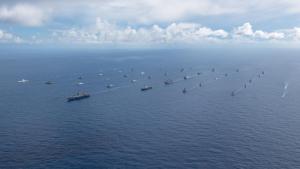 Shown in the photo snapped Thursday are 38 warships and three submarines participating in the biennial Rim of the Pacific exercise taking place in and around the Hawaiian Islands and Southern California.

It’s the world’s largest military exercise, involving ships and aircraft from 26 allied nations and 25,000 personnel. The exercise began June 29 and will conclude Aug. 4.

RIMPAC is taking place amid increased Chinese military activity around Taiwan, and warnings to the United States and its allies to stay away from the region.

While China has built up its military power in recent years, the United States can count on a large group of allies in the region, including Australia, Japan, the Philippines, Singapore, South Korea and Thailand. All are participating in RIMPAC.