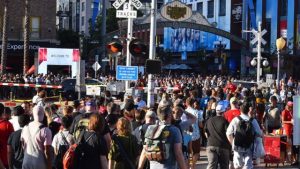 Crowds in the Gaslamp Quarter during Comic-Con in 2018. File photo by Chris Stone

After a two-year, pandemic-induced absence, San Diego’s uniquely own Comic-Con convention returns to the Gaslamp with celebrities, world premieres and thousands of fans no doubt thrilled, and maybe a little worried, to return for an in-person gathering.

The giant pop culture convention has been a San Diego success story that celebrated its 50th anniversary in July 2019. That was also the last time fans gathered at the San Diego Convention Center to celebrate their favorite comic books, movies and television shows.

A few months later, Coronavirus would be unleashed in America and in 2020 and 2021, organizers were forced to hold an online-only version of the Con. Then last fall, after vaccines became available, organizers held a stripped down, much smaller Comic-Con over the Thanksgiving weekend.

But starting this week, Comic-Con is back full force, with events, panels and other happenings scheduled to be held at the Convention Center July 21-24, with a Preview Night on July 20.

The pandemic remains a concern because of new variants that have led to a surge in COVID-19 cases and hospitalizations. As they did during last November’s mini-Con, organizers are requiring fans and all guests to provide verification of full COVID-19 vaccination status or proof of a negative COVID-19 test taken within 72 hours. In addition, everyone attending will be required to wear an approved face covering.

But, as usual, there will also be some outdoors activities that will make face coverings less of a concern.

With that said, here’s a look at some of the expected highlights:

The big film and TV studios are returning for presentations on some of the most hotly anticipated movies and shows.

Marvel usually owns Comic-Con and it once again takes center stage in Hall H on Saturday for a preview of the expanding Marvel universe. Marvel’s superhero movies have conquered the box office but the studio finds itself in a transition from the highly popular Avengers era to spotlighting second-tier characters in the Marvel universe on both the big screen and through streaming shows.

Marvel has had a history of dropping bombshell news and bringing their key actors to Comic-Con so expect some major news out of this panel.

Meanwhile, HBO hopes to strike gold again with a sequel to “Game of Thrones.”  “House of Dragons,” is set 200 years before “Thrones” and will debut on HBO just one month after Hall H premiere so fans in the room will likely get a huge sneak preview.

There’s also a preview of “The Lord of the Rings: The Rings of Power,” a new drama coming from Prime Video.

As Comic-Con has exploded in size, it has expanded beyond the Convention Center to the Gaslamp and East Village. This year is no different as studios look to entice fans with “activations” that showcase their shows, movies or video games

The food truck that will hand out free Wrath of P’Khan ice cream sandwiches from Coolhaus. Courtesy photo

In celebration of the 40th anniversary of “Star Trek II: The Wrath of Khan,” a food truck will be passing out free Wrath of P’Khan ice cream sandwiches from Coolhaus. The truck will be at the Petco Park Interactive Zone Saturday at 100 Park Blvd.

The Hilton Gaslamp Hotel will host “The Walking Dead Fan Celebration,” which will allow fans to relive some of the most iconic moments and characters from the past eleven season. “The Walking Dead” has had a history of showing off realistic-looking recreations at Comic-Con so expect to be delighted and maybe even scared.

An action scene from the Netflix film “The Gray Man” will be recreated at the ABM parking lot at the corner of First and Island avenues. The activation will challenge fans to hop on a tram car and race along roof tops in a chase scene from the movie.

Audible, the online audio content and podcast company, will have an “Audible Beach” featuring themed sand sculptures Thursday through Sunday at First Avenue and the Martin Luther King Promenade.

There’s no place like Comic-Con to get your geek on and that’s reflected in the dozens of panel discussions on pop culture and its impact on society.

Among the panels to look forward to this year is one that looks back at 1982, dubbed the greatest geek year ever with “Blade Runner,” “Poltergeist” and “Star Trek: The Wrath of Khan” among the offerings.

A group of attorneys argue about a lawsuit against the fictional town of Amity by families of shark attack victims in “JAWS: The Trial.”

And NASA scientists will talk about the James Webb Telescope and its incredible deep space images being released this summer.

So, once again, Comic-Con promises to be out of this world.