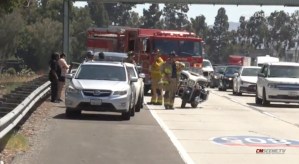 Firefighters and the CHP responded to the crash scene on Interstate 8. Photo credit: OnScene.TV

A chain-reaction crash on westbound Interstate 8 in Mission Valley slowed traffic Saturday leading to one motorist being sent to the hospital.

The California Highway Patrol, according to OnScene.TV, reported three separate collisions around 10:30 a.m. east of the Interstate 805 interchange.

One vehicle rear-ended another and four other vehicles collided with each other. The involved cars included a Toyota Camry that struck a Honda Civic, a Volkswagen Tiguan and Nissan Armada.

Medics tended to a female motorist who appeared alert as they placed her in an ambulance.

Traffic was backed up, but moving while the CHP was on scene.