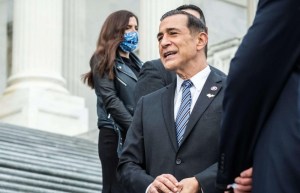 Rep. Darrell Issa at the Capitol. Photo courtesy of his office

Rep. Darrell Issa was a lone voice among the San Diego Congressional delegation on Friday in voting against two bills designed to protect abortion rights.

The first bill was re-introduced in the aftermath of the Supreme Court’s Roe v. Wade decision, while second comes in the wake of a 10-year-old rape victim having to travel from Ohio to Indiana to obtain an abortion.

The Supreme Court’s ruling said there is no federal right to abortion, but that it is up to individual states to allow or ban the procedure. Many states had trigger laws intended to come into effect after a decision, and some of those ban abortion even in cases of rape and incest, as is the case in Ohio.

“Efforts to criminalize abortion will pit neighbors against neighbors, take away women’s rights to make their own health care choices, and imprison doctors who took oaths to protect their patients,” said Peters after the votes.

Issa did not immediately respond to a request for comment, but after the Roe v Wade decision, he said, “Today is a great day for the cause and the principle of life.”

The two bills passed in the House and now go to the Senate, where a Republican filibuster is expected to prevent passage.