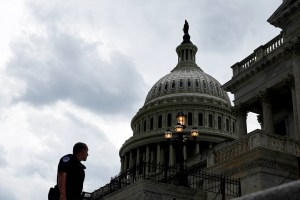 A U.S. Capitol Police officer stands on the Senate steps as storm clouds pass over the Capitol in Washington. REUTERS/Jonathan Ernst

Votes on bellwether bills to ban assault weapons and fight wildfires broke down on party lines this week, with all Democrats in the San Diego delegation voting to pass and Republican Rep. Darrell Issa voting against.

Legislation banning assault weapons passed 217 to 213 and the Wildfire Response and Drought Resiliency Act passed 218-199. Following Friday’s actions, both bills head to the Senate, where they face an uncertain future.

Democrats Sara Jacobs, Mike Levin, Scott Peters and Juan Vargas all voted in favor of both measures. Issa did not provide an explanation of his “no” votes.

Peters has long sought to renew the federal ban on assault weapons that expired in 2004. On a number of occasions, he has read the names of gun victims on the House floor.

“I co-sponsored the assault weapons ban because I am tired of seeing innocent Americans killed senselessly with military-style weapons — children at school, grandmothers at grocery stores, families at places of worship as we saw with the 2019 shooting at the Chabad of Poway,” said Peters after the vote.

The act would outlaw the importation, sale, manufacture, or transfer of semi-automatic rifles and pistols that use a detachable magazine and have military features.

The wildfire act would invest in water projects, wildfire suppression and land management; boost pay and benefits for wildland firefighters; and protect communities from catastrophic wildfires. It includes $500 million to prevent key reservoirs on the Colorado River from declining to critically low water levels.

In California, the bill would also fund environmental improvements for the Salton Sea and monitoring of the Mono and Owens lakes ecosystems.

“San Diego is on the frontlines of the climate crisis — with rising temperatures, a worsening drought, and fire seasons that are growing deadlier every year,” said Jacobs. “Across California, our worst drought in at least 1,200 years only increases the risk of severe and deadly wildfires. We need to address this crisis with the urgency it deserves.”

The bill includes provisions by Levin to spend $260 million over the next five years for desalination projects like the Doheny Ocean Desalination Project and Oceanside’s Mission Basin Groundwater Purification Facility.

“I’m proud that the Wildfire Response and Drought Resiliency Act includes two of my bills to invest in desalination projects that increase the supply of drinking water, as well as my legislation to ensure federal agencies take steps to strengthen the reliability of our electric grid and reduce power shutoffs,” Levin said after the vote.