San Diegans Filed 235,000 Complaints So Far This Year on City’s Get It Done App 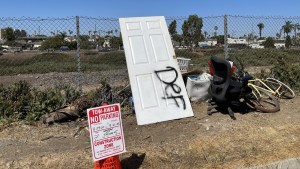 A door with graffiti on it, chair, bicycle and other items are piled against a chain-link fence on 33rd Street. The area was flagged in the city’s Get It Done app as a nuisance. (Alexandra Mondragon/inewsource)

The city of San Diego has fielded about  235,000 complaints this year through late August from residents concerned about issues affecting their quality of life.

One issue — parking violations — topped the list of concerns for residents, according to the reports filed through the city’s Get It Done app. San Diego residents are concerned with both 72-hour parking and parking zone violations, which combined made up nearly 40,000  reports so far this year.

Parking complaints, followed closely by homeless encampments and illegal dumping as chief concerns for residents, have captured the city’s attention.

The city of San Diego has set aside $2.9 million in its proposed budget to hire 23 new parking enforcement staff positions.

The city’s widely used Get It Done app offers a centralized place for residents to file complaints about infrastructure and other issues in their neighborhoods. The app, which has about 162,000 downloads, is free.

From January through August 24, the city fielded 235,000 complaints, resolving all but about 38,400 of them, according to data in the city’s app.  Residents have complained about a range of issues affecting mobility and quality of life in the city.

Reports include potholes and traffic signals, graffiti and late trash pickup, and even the lack of support for residents with disabilities. For example, one complaint said construction and the expansion of a restaurant into the sidewalk didn’t leave enough room for wheelchairs to pass by and created an obstacle for blind residents.