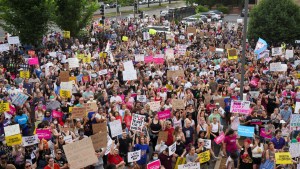 A group of up to 200 people gathered Saturday to demonstrate against the Supreme Court decision to overturn 1973’s Roe v. Wade decision legalizing abortion throughout the U.S.

The group at Waterfront Park dispersed at 11:25 a.m. according to the San Diego Police Department. The organizers of the rally weren’t identified and no disturbances or arrests were reported.

On Friday night, thousands attended at two separate rallies in downtown San Diego to protest the decision hours after it was announced.

About 1,000 people gathered at the Hall of Justice before marching through downtown streets. Another group of more than 1,000 gathered near Waterfront Park.

The Party of Socialism and Liberation announced on its Facebook page that it planned a protest against the court’s decision at 6 p.m. Saturday at Escondido City Hall.

Two large demonstration were set in downtown Los Angeles, one beginning in Grand Park that drew at least a couple hundred people before noon, and another at 1 p.m. outside the federal courthouse on First Street. Another rally was expected at the Federal Building near UCLA.

Elected leaders in San Diego County have largely condemned the ruling, which puts abortion policy at the discretion of states, many that have restricted and outlawed the procedure in recent months. Prominent Republican Darrell Issa celebrated the decision.

Friday’s opinion written by Justice Samuel Alito Jr. is similar to a draft that was leaked to Politico in May.

“We hold that Roe and (the 1992 Planned Parenthood vs.) Casey must be overruled,” Alito wrote. “The Constitution makes no reference to abortion, and no such right is implicitly protected by any constitutional provision, including the one on which the defenders of Roe and Casey now chiefly rely – the Due Process Clause of the 14th Amendment.”

Chief Justice John Roberts Jr. concurred, but did not join the majority opinion. He said he would have upheld a Mississippi 15-week ban on abortion, but would have not overturned Roe v. Wade.

“The court’s decision to overrule Roe and Casey is a serious jolt to the legal system,” Roberts wrote.

“Today, the court … says that from the very moment of fertilization, a woman has no rights to speak of,” their dissent read. “A state can force her to bring a pregnancy to term, even at the steepest personal and familial costs.”