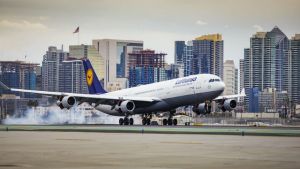 It’s a holiday weekend and as usual, San Diego is one of the top destinations, tourism officials said, along with Las Vegas and the Grand Canyon.

Other top choices for Southern California residents are expected to be Mexico and Yosemite.

Across the country, 48 million people are estimated to be traveling, according to the Automobile Club of Southern California, with the vast majority reaching their destination by driving, despite near record-high gas prices.

Southern California freeways and airports started getting a lot busier Thursday, as the holiday getaway began for millions of residents for the Fourth of July weekend.

The Auto Club estimates that nearly 3.3 million SoCal residents will be traveling for the holiday, the third-highest number for a Fourth of July holiday, behind only 2019 and 2018.

According to the Auto Club, 2.7 million Southern Californians will drive to their destinations for the long weekend.

For people driving, the transportation-analytics firm INRIX recommended that motorists avoid driving through Saturday afternoon, the end of the busiest travel time, with the Interstates 5 and 10 among the freeways anticipated to be the most congested.

San Diego International Airport reported multiple delays and cancellations for both arrivals and departures amid the ongoing difficulties afflicting airlines. In the U.S. Friday, according to FlightAware.com, there were 7,226 delayed flights as of 8:30 p.m. and 580 cancellations.

In San Diego, there is also ongoing construction that will require passengers to plan for earlier arrivals in order to make their flights.

In addition, local airport officials noted a traffic hiccup Friday that may have impacted those headed to the airport – a traffic signal malfunction at North Harbor Drive and Harbor Island Drive. The airport reported the issue on social media at 8:40 a.m. and noted that the lights were back in service after 2 p.m.

Los Angeles International Airport officials said they expect to see as many as 115,000 departing passengers passing through the airport each day Thursday through Saturday, and again Tuesday and Wednesday.

“We expect the Independence Day holiday weekend to be the busiest we’ve had in more than two years,” Justin Erbacci, CEO of Los Angeles World Airports, said in a statement.

Another complication in L.A. – dozens of off-duty Delta Air Lines pilots picketed for two hours at LAX Thursday, part of a nationwide labor action calling for an improved contract. Representatives for the pilots say the action is aimed at obtaining improved pay and better scheduling and work conditions.

Delta officials issued a statement saying the picketing would not impact flight operations, because all of the participating pilots are off-duty.

The pilots at LAX did not appear to be impacting traffic in the terminal area, mainly standing on the curb holding signs.