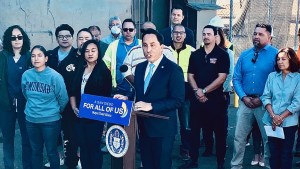 Mayor Gloria at the announcement of the Build Better SD initiative in Feb. Photo via @MayorToddGloria Twitter

“For the past 40 years, we’ve used developer fees to pay only for specifically listed infrastructure in the communities where the fees were generated,” Gloria said. “Once upon a time, that made sense — but not anymore.”

“Now, that system only perpetuates historic inequities and leads to millions of desperately needed infrastructure dollars sitting unused,” he said. “That changes today. With Build Better SD, we’ll be able to prioritize projects — libraries, streets and other public spaces — where the need is greatest and get projects across the city completed faster.”

Previously, when private projects were built, the development impact fees property developers pay toward new infrastructure improvements — such as libraries, streets and other public spaces — varied widely across communities based on often decades-old planning documents.

These collected fees went into 43 separate neighborhood funds and could not be shared across neighborhood lines. According to Gloria’s office, many of these individual pots of money were insufficient to finance planned improvement projects, resulting in a current combined total of $222 million in unspent funds in different neighborhoods across the city.

“There is no doubt that many communities across our city suffer from outdated policies that enable underinvestment in infrastructure,” said City Council President pro Tem Monica Montgomery Steppe. “I’m looking forward to the implementation of Build Better SD to address infrastructure gaps in our areas with the greatest needs.”

The mayor’s initiative is intended to change this by putting future development impact fees into citywide funds by asset type — reducing the pots of money from 43 to just a handful. Infrastructure needs will be examined across San Diego by city staff and funding will be directed to high-priority projects.

“The developer impact fee program was long overdue for an overhaul, as it could no longer deliver infrastructure and resources for maximum impact in our neighborhoods,” said Councilman Joe LaCava.

“Build Better SD will be a transparent conversation with our neighborhoods to deliver the infrastructure and city facilities to serve the increase in housing. Build Better SD ensures that we can allocate infrastructure dollars when and where they will have greatest impact, while we continue to protect existing funds in their community lockboxes.”

Despite the rule change Monday, previously collected fees will remain restricted to the neighborhood in which they were collected, but can be topped off with new citywide fee collections to implement projects faster in every part of the city. A similar funding structure was applied to parks through Gloria’s Parks for All of Us initiative, passed by the City Council in August 2021.

“This is a win for our historically underserved neighborhoods and our city as a whole,” said Heidi Vonblum, the city’s planning director. “Our communities are in desperate need of infrastructure and rather than collecting money to languish in their individual neighborhood funds, these new policies focus on delivering these investments to our communities more efficiently, quickly and equitably.”

A statement from the mayor’s office said to ensure the initiative is implemented appropriately, new policies in the city’s general plan will “prioritize investments in areas with the greatest needs, including where the most growth is occurring, and create more opportunities to gather community input on the types of infrastructure projects our residents most want and need,” it reads.