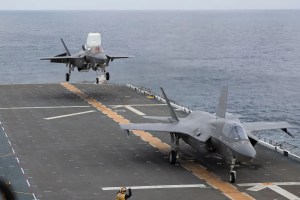 At lest four U.S. warships, including the San Diego-based USS Tripoli, were positioned in waters near Taiwan Tuesday on what the Navy called routine deployments amid Chinese anger over House Speaker Nancy Pelosi’s visit the island.

The nuclear-powered aircraft carrier USS Ronald Reagan had transited the South China Sea and was currently in the Philippine Sea, east of Taiwan, a Navy official told Reuters.

The Japan-based Reagan is operating with a guided missile cruiser, the USS Antietam, and a guided-missile destroyer, the USS Higgins.

“While they are able to respond to any eventuality, these are normal, routine deployments,” said the official, who spoke on the condition of anonymity.

The official said the USS Tripoli, the Navy’s newest big-deck amphibious ship, was also in the area. The warship is carrying 20 F-35 stealth fighters as well as a Marine reaction force of 1,700 with their helicopters and tiltotors.

Pelosi, a long-time China critic, arrived in Taipei on Tuesday night local time, people briefed on the matter said, as the United States said it would not be intimidated by Chinese warnings over the visit.

Signs emerged of military activity on both sides of the Taiwan Strait ahead of Pelosi’s visit.

Chinese planes flew close to the median line dividing the waterway on Tuesday morning and several Chinese warships had remained close to the unofficial dividing line since Monday, a source briefed on the matter told Reuters.

China’s defence and foreign ministries did not immediately respond to requests for comment.

The source said the Chinese aircraft repeatedly conducted tactical moves of briefly “touching” the median line and circling back to the other side of the strait while Taiwanese aircraft were on standby nearby — a move they described as provocative.

The person said three other Chinese warships on Tuesday carried out drills to simulate attacks on carrier-borne aircraft in waters east of Taiwan. The ships had been tracked sailing through Japan’s southern islands at the weekend, the Japanese Defence Forces said.

Some regional military analysts say that increased deployments at a time of tension raise the risk of accidents, even if no side wants an actual conflict.