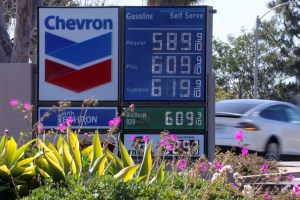 Gas prices at a station in Carlsbad in early March. REUTERS/Mike Blake

The average price of a gallon of self-serve regular gasoline in San Diego County dropped Monday for the 47th consecutive day since rising to a record, decreasing four-tenths of a cent to $5.568, its lowest amount since March 8.

The average price has decreased has dropped 80.5 cents since rising to a record $6.373 on June 15, including 1.1 cents Sunday, according to figures from the AAA and the Oil Price Information Service.

The national average price dropped for the 48th consecutive day following an 18-day streak of increases, decreasing eight-tenths of a cent to $4.212. It has dropped 80.4 cents since rising to a record $5.016 on June 14, including 1.2 cents Sunday.

The national average price is 14.3 cents less than one week ago and 63 cents lower than one month ago, but $1.039 more than one year ago.