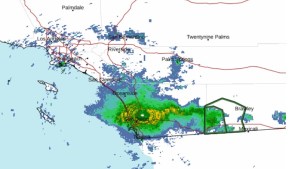 National Weather Service radar image shows rain over much of San Diego County at 8:30 p.m. with an area of flash flood potential over Imperial County.

San Diego County received unexpected thunder and rain on Monday afternoon and evening, with thunderstorms active from the coast to the deserts.

The storms dumped inches in parts of the back country, and prompted flash flood warnings, but gentle showers fell along the coast.

“It was a very active monsoon day across our service area with numerous thunderstorms developing over the mountains,” the National Weather Service reported.

Along the coast and in the valleys, the monsoonal activity produced “sprinkles and areas of light rain…just enough to wet the roadways,” the weather service said.

Mt. Laguna and Pine Valley both received well over an inch of rain, but most rainfall totals were low, with just 0.05 inches in Santee, 0.04 in Poway, 0.03 in Del Mar and 0.1 at Montgomery Field.

At sundown San Diegans were sharing photos of rainbows on Twitter.

The forecast calls for a chance of showers and thunderstorms each afternoon and early
evening this week in mountains, deserts and inland valleys.