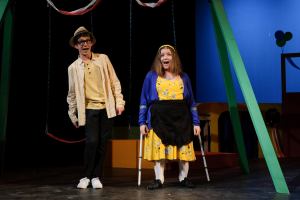 First up, to mark the milestone, the Junior Theatre Parent Auxiliary hosts the “JTogether” Picnic at 11 a.m. Saturday in front of Balboa Park’s Casa del Prado Theatre, the theater’s home.

There will be music, food and drink for purchase for members and the public alike, as well as information on upcoming classes, camps and shows.

Also, look for the final Saturday performance of each production offer American Sign Language interpretation, made possible by a contribution from The Conrad Prebys Foundation. Members of the deaf community may reach out directly to the box office for the best seating.

Notable junior theatre alumni include Tony Award-winning Broadway star Brian Stokes Mitchell and Casey Nicholaw, director/choreographer of such Broadway hits as Mean Girls, The Book of Mormon and Something Rotten!