San Diego Pride Week 2022: What You Need to Know 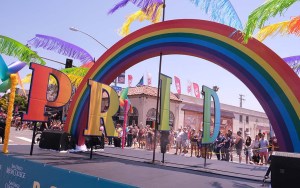 San Diego Pride is best known for the big Saturday parade in Hillcrest, and it’s back this year on July 16.

But there’s so much more in the week leading up to the parade, starting Saturday with SheFest. Are you ready?

Pride, celebrating the LGBTQ community, has grown from a small grassroots march for equal rights into the region’s largest civic event. In addition to the annual festivities, the local Pride organization has donated more than $2.5 million to nonprofits while running multiple year-round community service programs

Here’s a rundown of the events (and some logistics too), including next weekend’s parade and festival, many of which are free.

Hillcrest Pride Flag, 1500 University Ave., noon Saturday, with a stage for entertainment and activities, along with workshops that celebrate women and non-binary people.

Light Up the Cathedral

St. Paul’s Episcopal Cathedral, 2728 Sixth Ave., 7 p.m. Wednesday, local faith leaders will gather to celebrate “faith and resilience” with the lighting of the cathedral in rainbow colors to follow.

Pride Yoga at the Rady Shell

Hillcrest Pride Flag, 6 p.m. July 15, when local leaders receive recognition for their work in the LGBTQ arena, such as Trans Youth, honored as the Community Grad Marshal, and Viejas Casino and Resort. A slate of six advocates will speak. The free Pride Weekend Kickoff BBQ, at the nearby University Christian Church, 3900 Cleveland Ave., follows at 6:30 p.m.

Hillcrest Pride Flag, starting point, at 10 a.m. July 16. The 1.5-mile route heads west from University and Normal Street, turning south on Sixth, then left onto Balboa Drive before ending at Laurel Street. Somewhere from 250-300,000 people are expected to line the route, so arrive early and prepare for traffic and detours.

The free parade – the theme this year is “Justice with Joy” – includes a military contingent and youth marching band. Day starts with 8 a.m. 5K walk/run.

For shuttles, park at the Old Naval Hospital at Park Boulevard and President’s Way. Shuttles run from 7 a.m. to 3 p.m. If you’re not near the post-parade festival, pick up a shuttle to Balboa Park at Essex and Richmond streets from noon to 4 p.m.

For those who need accessibility vans, the vehicles will be on call for both the parade and festival from 8 a.m. to midnight on July 16 and from 7 a.m. to 10 p.m. July 17. Ask volunteer at the shuttle stop for assistance.

Balboa Park, Sixth and Laurel, 11 a.m. July 16-17, festival features booths, food, art and more than 100 performers on four stages, including those focused on Latino and Pan-Asian communities. Admission starts at $26 for one day, with two-day passes at $32, in advance, ending Thursday. Those of high-school age or younger admitted free.

For shuttles, park at the Old Naval Hospital at Park and President’s Way. Shuttles run to Sixth and Juniper Street from 8 a.m. to midnight July 16. The next day, they run 8 a.m. to 11 p.m.

Accessibility vans are also available for the festival.