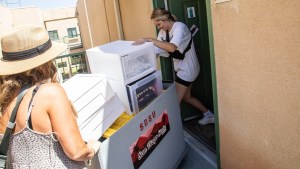 San Diego State University is poised to welcome its largest ever incoming class following a record number of applications, it was announced Monday.

The university has admitted nearly 6,500 students — chosen from nearly 77,000 first-time student applications received between October and December, its highest-ever number of applications.

Welcome back, Aztecs! We're so glad to see you back on campus.

Admitted students are from around the region, country and world, representing 45 states and 46 countries, according to the university. More than 1,900 are from the local area, an increase of 23% from last fall.

“Given the challenges they faced over the last two years, and the record applicant pool from which they were chosen, they certainly earned their admission and we’re eager to support them in the next step of their journeys,” Stefan Hyman, associate vice president for enrollment management, said in a statement.

According to SDSU figures, the incoming class has a grade-point average of about 3.9 of these high achieving students.

In addition to the first-time students, SDSU has also admitted one of its largest-ever transfer classes — 3,900 students, of whom two-thirds are local.