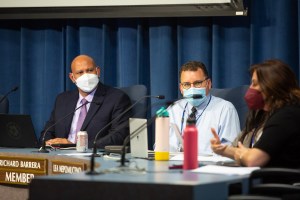 With mass shootings continuing in schools across the country, San Diego Unified leaders are going to voters in November for approval to borrow  $3.2 billion to pay for security and safety improvements.

The district Board of Education unanimously voted on the bond package Tuesday. If approved by district voters, $296 million would pay for security and safety improvements, with remaining funds going to renovate facilities and address a backlog of deferred maintenance.

The borrowing plan is the district’s fourth in 15 years, totaling $11.5 billion.

Several community members spoke in support of the bond during public comment Tuesday, with some adding how paramount student safety is.

The district’s vote comes on the heels of a summer struck by gun violence after several shootings led to mass casualties. Ten Black people died in May after a white gunman opened fire at a Buffalo, New York, supermarket.

In June, a mass shooting took place at a Ulvade, Texas school, resulting in the death of 19 children and two teachers. Then in July, an Independence Day parade outside Chicago turned deadly when a gunman fired more than 70 rounds, injured more than three dozen individuals and killed seven victims.

The shooting in Uvalde, in particular, set off a familiar debate — in San Diego and elsewhere — over how best to protect children: hardening schools or making it more difficult to purchase guns.