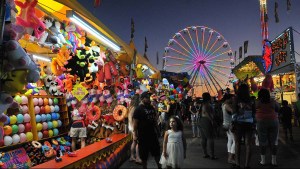 Ah, independence. Some enjoy more than others, of course, but every American is entitled to take a pause to contemplate their freedoms – and fireworks, too – come Monday. So naturally, much of this San Diego weekend will be sprinkled in red, white and blue.

The San Diego County Fair enters its final weekend, all leading up to the big fireworks finale Monday. See monster trucks and comedy shows all weekend, and on Saturday indulge at the Distilled Spirits and Cocktail Festival. And don’t forget to grab your final peanut butter meatball or fried bacon-wrapped jalapeño of the season. At the Del Mar Fairgrounds, with general admission at $20.

The National City Lions Club has it right. Celebrating July 4 isn’t just a day-long affair – it should be all weekend long. The organization’s carnival at Kimball Park continues through the Fourth with rides, games, food and more. Doors open at 5 p.m. Friday and 1 p.m. Saturday and Sunday. On Monday, arrive early at noon or in the evening for the 9 p.m. fireworks.

We loves us some Julian apple pie and the snow is dandy too. But how about gems in July? Try out the community in the summertime as Julian Town Hall hosts the inaugural Julian Gem and Mineral Show from 10 a.m. to 5 p.m. Saturday and Sunday.

Salute the red, white and blue at your local Fourth of July parade. Photo by Chris Stone

Little Italy opens its Summer Film Festival Saturday at the Amici Park Amphitheater. See Ammore e Malavita – meaning Love and Bullets – and have a picnic under the stars at West Date and State streets. Don’t worry – there will be subtitles. The free series continues at 8 p.m. each Saturday through Sept. 3.

You might think of a couple of countries before the U.S. when it comes to top wines. So let Vino Carta in Little Italy and Solana Beach remind you with the All-American Wine Flight featuring the best from Napa Valley to southern Texas. Explore food pairings and play with flavor profiles too. Try five wines for $25 at the bar from noon to 5 p.m. Sunday.

Monday’s the big show though – with July 4 parades and fairs set for many communities, including Coronado, Lake Murray, Poway and Rancho Bernardo.

And at night, there’s the Big Bay Boom, which has a reputation for excellence (and infamy) as THE fireworks spectacular. Here’s just a few of the places along San Diego Bay where you can watch – Spanish Landing Park, Harbor Island and the Embarcadero. But want to see a show closer to home? They will be hosted across the county, so check out our Complete Guide to San Diego County Fireworks for all the options.