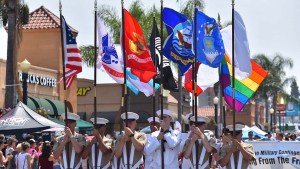 This San Diego weekend marks the first of two consecutive weeks of some of the biggest events our region has to offer – San Diego Pride and well, something that rhymes with Domic-Don. Ready? There’s penguins, theater and a couple of food fests too.

Head out for the first weekend of tiny penguins at the Birch Aquarium at UC San Diego’s Scripps Institution of Oceanography. The Beyster Family Little Blue Penguins exhibit follows the world’s smallest penguins as they grow from wee hatchlings to not-very-big adults. Sure the cuteness is off the charts, but you can learn about the challenges they face due to climate change too. Admission costs $25 for adults and $20 for youngsters.

The marquee event of San Diego Pride is Saturday’s 10 a.m. parade, but that’s far from all. There’s a block party and festival book-ending the big procession along University Avenue in Hillcrest. Here’s some details:

The big day is finally here…Beyster Family Little Blue Penguins is officially open to the public at @Birch_Aquarium!

Make sure to reserve your tickets online in advance, and come meet these charismatic, pint-sized penguins: https://t.co/06veh1mnfO #LittleBlues pic.twitter.com/DtYo0rBEE0

Enjoy two masters this weekend at the Old Globe Theatre in Balboa Park. Head out to see the premiere of On Beckett at the Donald and Darlene Shiley Stage. The show, through Sunday, explores the works of Samuel Beckett, which include Waiting for Godot, through the eyes of Bill Irwin, an actor of notable range. Yep, the Tony winner starred in Who’s Afraid of Virginia Woolf, but you might know him as Mr. Noodle on Sesame Street too. Tickets start at $36.

The other master? Some guy named Shakespeare. At 11 a.m. Sunday, the Old Globe again hosts the popular annual event, “Thinking Shakespeare Live,” in person, also on the Shiley stage. Billed as a “how-to guide,” the program is for those who are interested in masterworks like Hamlet and Romeo and Juliet, but still a little intimidated, by you know, the Bard. Admission ranges from $10-25.

It’s summer (or fall, or winter or …) so there must be a beer fest in San Diego. The Best Coast Beer Fest at Waterfront Park at 1 p.m. Saturday offers unlimited tastings from more than 100 breweries. But there’s more – local performers and food trucks too. Admission starts at $55.

Tucking into a nice juicy slice of watermelon is one of the best ways to beat the heat. Do it Saturday and Sunday at the Oceanside Watermelon Festival. The family-friendly event, at 10 a.m. each day, includes activities and crafts for kids, local vendors and music. And all the watermelon treats you can eat? But of course.