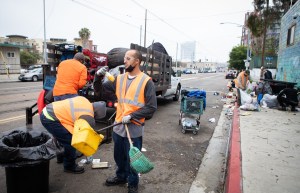 City and contract workers sort through belongings left on the sidewalk during an enforcement sweep on Commercial Street in San Diego.(Zoë Meyers/inewsource)

San Diego might be running afoul of court orders that dictate how city officials are supposed to clean homeless encampments, discard property and enforce a law about blocking a sidewalk, according to an inewsource analysis and two attorneys who fight for unsheltered San Diegans.

Multiple incidents, both witnessed by inewsource and shared on social media, show city officials breaking the rules when it comes to posting notices prior to cleaning and throwing away property without giving people an opportunity to claim it.

Top city officials are harping on the police department’s use of encroachment — a law that was intended to prohibit trash cans from blocking a sidewalk — to remove homeless people from encampments that they say pose a hazard to pedestrians. In fact, emails obtained by inewsource reveal San Diego police discussed using the law as a tool eight years ago to clear parks and other public spaces for “normal citizenry.”

“Summer and the warm weather are coming and we need to make sure the parks and rec centers are being used by folks they were intended for … kids, families, sports groups and they don’t become transient camps,” reads a 2014 email that was sent from one high-ranking police official to several others.

Local attorneys Scott Dreher and Coleen Cusack argue the city’s approach not only violates legal agreements the city has made, but it’s unconstitutional.

“The city’s just flaunting everything,” said Dreher, who has filed four lawsuits over the past two decades against the city for its treatment of homeless people — three of which established rules for encampments and enforcing laws.