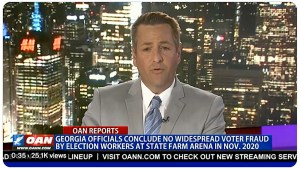 Less than two months after settling a lawsuit filed by two Georgia election workers, the owners of San Diego-based One America News appear ready to resolve another case — against AT&T.

Lawyers for Herring Networks, OAN’s owner, and defendant AT&T this week were granted a pause in the case. Hearings set for Aug. 26 in downtown Superior Court were pushed back to mid-January 2023.

AT&T and Herring agreed to “stay all pending matters … to allow the parties to explore potential resolution of this matter,” according to a joint stipulation heard Wednesday.

AT&T and reps for the far-right cable network didn’t respond to requests for comment.

Meanwhile, OAN won a delay in the $2 billion lawsuit brought by voting machine company Smartmatic. And a video that was part of a settlement in the Georgia case no longer appears on OAN social media or website.

On Friday, federal Judge Carl J. Nichols in the District of Columbia said Herring Networks didn’t have to answer — respond to — Smartmatic’s complaint by July 5, as originally scheduled.

Instead, Nichols granted an extension to Aug. 5.

“The answer will be a significant undertaking because of the size and scope of the Complaint, which spans 193 pages and includes exhibits spanning 3,326 pages,” said Herring attorney Blaine Kimrey.

Kimrey added: “An extended answer deadline is further justified by the fact that one or Herring’s lead attorneys, Bryan Clark, will be out of the country for 10 days in July for previously scheduled travel.”

Smartmatic and Dominion Voting Systems both allege that OAN defamed them with its stolen election lies, causing great financial harm.

In the AT&T case, filed March 7, Herring lawyers allege breach of contract and violation of California’s Unfair Competition Law among other things after former AT&T unit DirecTV said it would drop OAN from its cable offerings.

In mid-January, Reuters reported that DirecTV, with 15 million subscribers, was by far OAN’s largest carrier. According to testimony by OAN’s accountant, DirecTV provided 90% of the network’s revenue.

AT&T spun off DirecTV in August 2021, but the telecom giant stayed in OAN’s sights.

OAN was launched July 4, 2013, with main studios in the Bay Ho area of San Diego. In May 2020, the network saw its $10 million defamation suit against MSNBC star Rachel Maddow dismissed on First Amendment grounds. A federal appeals court upheld that ruling.

Hearings set for 10 a.m. Jan. 13 include ones dealing with First Amendment-protecting SLAPP statues, demurrers and motions to strike (dismiss the case).

In seeking to delaying the AT&T case, a legal filing said: “The parties agree and stipulate that an attempt to resolve the case constitutes good cause to seek the relief requested in this Ex Parte Application and have executed a Stipulation to that effect.”

In April, Atlanta election workers Wandrea “Shaye” Moss and her mother, Rudy Freeman, said they had a “successful one-day mediation” with OAN and had “signed a binding set of settlement terms” with the Trump-friendly network.

On June 22, Moss testified before the congressional committee investigating the Jan. 6, 2021, insurrection — describing how a conspiracy theory spread by former President Trump and his lawyer Rudy Giuliani (and promoted by OAN) led to violent threats against her and her family.

Sample OAN posts in the days after Georgia election workers suit was settled. All have been deleted from OAN’s Twitter account.

Details of the OAN settlement with Moss and Freeman weren’t disclosed, but they included posting of a 30-second video with an announcer saying: “Georgia officials have concluded that there was no widespread voter fraud by election workers who counted ballots at State Farm Arena in November 2020…. A legal matter with this network and the two election workers to the mutual satisfaction of through a fair and reasonable settlement.”

Copies of the video can still be seen.