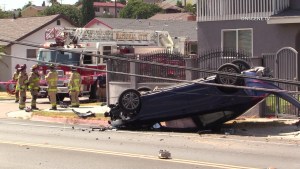 The overturned vehicle that hit the pole on Parkside Avenue and Beatrice Street near Bonita. Photo credit: OnScene.TV

Utility crews worked Tuesday to restore power for thousands of customers in National City, and the communities of Bay Terraces, Paradise Hills and Skyline that lost service when a vehicle struck a power pole.

According to the San Diego Police Department, the power outage was reported shortly after 2 p.m. when the vehicle hit the pole on Parkside Avenue and Beatrice Street near the community of Bonita.

One person was trapped in the vehicle, but couldn’t be extricated from it until a live wire was safely removed, SDPD said. It was unclear if the person was injured.

Power was expected to be fully restored on Wednesday morning.