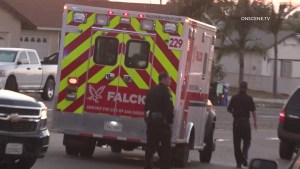 One of the patrol personnel responded by zapping the suspect with an electric stun gun, which did not subdue him, sheriff’s Lt. Chris Steffen said. Photo via OnScene.TV.

A sexual assault suspect who prompted a non-injury police shooting when he allegedly pulled what an officer believed was a gun during a foot chase in a Bay Terraces-area neighborhood was in custody Friday.

Maurice Littlejohn, 44, allegedly threatened officers with a cane and a knife when they contacted him shortly after 7:30 p.m. Thursday while investigating a report of a sexual assault in an apartment in the 300 block of South Meadowbrook Drive, according to the San Diego County Sheriff’s Department, which investigates shootings involving San Diego police.

One of the patrol personnel responded by zapping the suspect with an electric stun gun, which did not subdue him, sheriff’s Lt. Chris Steffen said.

Littlejohn then ran off, and the officers gave chase.

As he fled, he allegedly reached into his waistband and grabbed something. Believing the object to be a gun, an officer fired two or three rounds from his service pistol at Littlejohn, missing him.

Following the gunfire, Littlejohn continued to run, but officers soon caught up with him and took him into custody at the nearby intersection of Brookhaven Road and South Meadowbrook Drive.

Littlejohn was treated at a hospital for minor injuries before being booked into San Diego Central Jail on suspicion of assault and resisting arrest, the lieutenant said.

No other injuries were reported.

Authorities did not immediately disclose what the suspect allegedly pulled from his waistband while fleeing from police nor how he was injured.