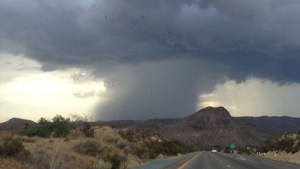 There were areas of high clouds drifting slowly northwest over Southern California on Sunday morning, but no showers were detected over the area as of 8 a.m.

A flood watch was in effect for the mountains, where heat should be enough to fire off some strong thunderstorms later Sunday.

The atmosphere may dry out a bit and become more stable through midweek as high pressure builds, the NWS said. This could result in some warming, but monsoon flow was likely to return late in the week as high pressure drifts east, and opens the door for more clouds, showers and thunderstorms.

For Monday, not a whole lot of change was forecast as the monsoon flow continues, although some modest drying was indicated.

By Thursday, the ridge was expected to be on the move again, drifting northeast and setting up over Colorado. The ridge also morphs back to a more cellular form, guiding monsoon moisture back up over Southern California, renewing the chance for showers and thunderstorms and increasing the humidity levels.

Some precipitation was predicted for next weekend and into early the following week.