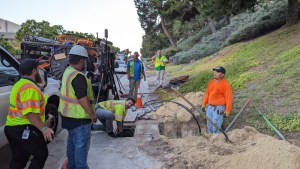 The cable was cut near the intersection of Del Mar Heights Road and El Camino Real around 11 a.m. on Saturday. A spokesman for Spectrum said a contractor working for another company had cut the cable.

Nearly a dozen Spectrum service vehicles lined the north side Del Mar Heights Road for hours as crews worked to string a new cable. They were expected to work through the night.

As of 7:30 p.m., service was still out, but a crew member said he hoped service would begin to be restored later in the evening.

“A third party contractor damaged our network by cutting our fiber lines today, causing a disruption of services for some customers in Carmel Valley,” a Spectrum spokesman said. “We are restoring services as quickly as possible and appreciate our customers’ patience as we make the necessary repairs.”

Customers who called the customer service line were told that it was a major outage and there was no estimate as to when service would be restored.

Service was reported to be fully restored at 9 a.m. on Sunday.