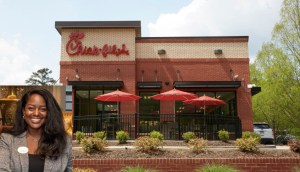 From restaurant worker to corporate intern to leadership development – local Amber Thomas had hit almost every milestone at Chick-fil-A. Except for owner/operator.

Until now. She opened her first Chick-fil-A, near Spring Valley, Thursday, years after she joined the popular fried chicken chain at 17.

Thomas, a long-time resident of the region, said her company “not only holds a special place in my heart, but my family’s hearts too.” While growing up in Virginia, it was a tradition for the clan to eat out at Chick-fil-A for Tuesday kids nights. After their move to San Diego, they drove 45 minutes for dinner at the closest Chick-fil-A.

She wants to provide a similar family-friendly atmosphere at her franchise, at 931 Sweetwater Road, at Jamacha Boulevard in La Presa.

“To me and my family, Chick-fil-A was a place of togetherness, which is what I hope to create in Spring Valley – serving the community and those who are under-resourced while offering opportunities to the next generation of team members,” she said.

The new restaurant will create jobs for 160 people. In honor of the opening, Chick-fil-A, Inc. will donate $25,000 to Feeding America on behalf of the new restaurant for distribution to partners in the greater San Diego area.

Thomas’ restaurant also will be part of the Chick-fil-A Shared Table Program, which redirects surplus food from the restaurant to local soup kitchens, food banks and other nonprofits in need.

The Chick-fil-A, near state Route 125, will be open for dine-in, drive-thru or carry out from 6:30 a.m. to 9 p.m. Monday through Saturday. The multi-lane drive-thru for carry out remains open until 10 p.m.