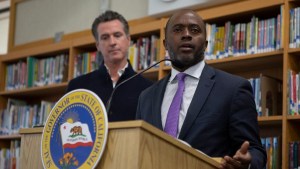 During the pandemic, public education became a highly contentious arena for vitriol around masking, vaccines and reopening schools. But those tensions did not culminate in a heated election for California’s top schools chief.

State Superintendent of Public Instruction Tony Thurmond has raised more than 10 times as much money as all his other competitors combined, and he’s earned endorsements from powerful teachers unions and interest groups, making him likely to glide easily into a second four-year term. Because it’s a nonpartisan contest, unlike the other statewide offices on Tuesday’s primary ballot, if he or someone else wins a majority of the vote, they are immediately elected, without a November runoff.

Thurmond’s smooth path is despite reports of a toxic management style, questionable hiring practices and a general lack of leadership in helping schools navigate the pandemic.

But Thurmond, a former state Assemblymember and social worker, says he stands by his accomplishments.

“The reason I want this job is because I see what schools need, and I want to see them bounce back,” he said in an interview with CalMatters this week. “I know how to move the systems to help them get what they need.”

Numerous educators, lawmakers and experts who have worked with Thurmond during his first term say much of his work happens behind the scenes. Since entering office in early 2019, Thurmond has launched various task forces and working groups of education experts who generated sets of recommendations for legislation.

“He listens to the multiple voices, and I don’t think people give him enough credit for that,” Spiegel-Coleman said. “Everyone’s telling you what you should do, and he listens and does his best.”

The responsibilities of the state superintendent of public instruction are twofold. First, it’s to oversee the California Department of Education and its 1,500 employees. The agency largely helps local schools and districts implement the policies set by lawmakers in Sacramento.

“You can pass a policy, but that doesn’t matter if you can’t implement it,” said Michael Kirst, former president of California’s state board of education. “The California Department of Education in my view is an administrative body that carries out policy.”

Second, the state superintendent uses the office’s bully pulpit to bring attention to key issues in education, including literacy, the achievement gap or racial discrimination in schools. The superintendent can then influence bills in the Legislature or the state budget.

Kirst — who served on the state school board from 1975 to 1982 and again from 2011 to 2019 when Jerry Brown was governor — said it’s crucial for the governor and the superintendent to see eye-to-eye. He said tension between the two offices has stalled education policy.

“I’ve seen that movie, and it isn’t pretty,” he said. “You don’t see denunciations of [Gov. Gavin] Newsom by Tony Thurmond, and Newsom sees Thurmond as another respected elected official.”

The office does not allow for any kind of direct control over California’s public schools, which largely operate under “local control.” While parents called for Thurmond to reopen schools during the pandemic, he said he wasn’t able to do that with “a push of a button.”

Despite these limited powers, the contest for state superintendent hasn’t always been this tepid. In 2018, Thurmond and his opponent Marshall Tuck spent a combined $50 million in their campaigns. Tuck finished first in that year’s June primary, but narrowly lost to Thurmond in the November general election.

Tuck ran on a pro-charter schools platform, which turned the election into a proxy war between teachers unions and advocates for more school choice. But political insiders say the money spent in that election was nowhere near proportional to the powers of the office.

“A lot of the fights around charters are centered around changes to the law,” said Barrett Snider, a lobbyist for school districts with Capitol Advisors. “It’s not something that the state’s superintendent can do alone.”

While lawmakers did tighten regulations on charter schools during Thurmond’s first term, Snider and Kirst say the landscape wouldn’t have been much different if Tuck had won in 2018, largely because legislators and Newsom led the charge. Snider and Kirst say the battle over charter schools has calmed since the last election because the fallout from the pandemic has displaced the debate over school choice.

None of Thurmond’s challengers this year have raised nearly as much money as Tuck did, but multiple candidates including Lance Christensen, an education policy executive from the Sacramento region, and George Yang, a software architect from the Bay Area, are calling for loosening restrictions on charter schools.

“I’m a huge advocate for charter schools, but they’re basically in a defensive posture right now,” Christensen told CalMatters. “Charter schools are doing what they can to hold on for dear life.”

The superintendent’s race is the only way for voters to push for more school choice this election year. A proposed ballot initiative that would have created savings accounts for parents to spend on tuition at private schools or tutoring failed to gather enough signatures.

In his first term, Thurmond created eight task forces. These teams of experts and educators met to discuss ways to address the achievement gap, literacy and access to technology.

Multiple experts who contributed to these task forces said they were skeptical about these indirect means of affecting policy.

“People naturally wonder, is this going to be a good use of my time? Is this going to result in something new or better?” said San Diego State University professor Joe Johnson, who participated in the Black student achievement task force. But he and most of the other experts came out of their experiences with optimism.

“He conveyed to me that it would generate a set of ideas that would help arm him to generate some policy,” said Tyrone Howard, a UCLA professor who also sat on the Black student achievement task force. “Rarely do I hear folks try to connect to direct legislation.”

Thurmond said the findings from these task forces have informed bills related to diversifying the teacher workforce and expanding summer literacy programs. He said he “stayed up all night” writing a bill, Senate Bill 1229, that would provide more mental health professionals at schools. The bill passed the Senate in late May and is in the Assembly.

“I assimilated some ideas that came out of the task force, but I wrote the legislation,” he said. “Task force members never said, ‘Hey write a bill.’ They said we need culturally competent mental health clinicians.”

The digital divide task force, launched in April 2020 to address the challenges of virtual instruction during the pandemic, raised more than $30 million and distributed more than 100,000 computers and hotspots.

The state budget last year ultimately included $5 billion for technology, which was more than enough to meet the approximately $500 million cost of closing the digital divide estimated by Thurmond’s task force. The superintendent said the task force’s work has paused for now, but he plans to resume at some point to think beyond ensuring students’ access to hardware towards more tech literacy and computer science instruction.

“The task force grew out of necessity,” he said. “I think we’re done for now, but I think we’ll have more work to do.”

The Criticisms of Thurmond

Despite this behind-the-scenes work, Thurmond is no stranger to controversy and criticism. In September, Politico reported that former employees alleged that Thurmond created a “toxic” workplace through an abusive management style. According to the report, nearly two dozen senior officials had left the agency since Thurmond entered office.

Another Politico report found that he had hired a deputy superintendent to oversee equity who was living in Philadelphia while working for the California Department of Education. Daniel Lee resigned days after the report was published. Thurmond said his team got some “bad advice” on who he could hire, but he praised Lee’s work for the department.

“But look, they helped to make things better for us. They helped us expand diversity training,” he said.

Thurmond has also played more of a supporting role to Newsom and the California Department of Public Health in helping schools navigate the pandemic. He was absent at a 2021 press conference where Newsom and other lawmakers announced the plan to reopen public schools.

Christensen, who’s challenging Thurmond, said he would have told school districts they would only get state funding if they reopened classrooms.

“Saying he played a support role is very generous,” he said of Thurmond. “He was a nonentity.”

Thurmond said his absence from the spotlight has been blown out of proportion.

“The only evidence anyone has ever given is me not being at one press conference,” Thurmond said. “I’ve visited 60 school districts and brought resources to help schools bridge past the pandemic.”

Pedro Noguera, the dean of the USC Rossier School of Education who participated in Thurmond’s Black student achievement task force, said the superintendent could have done more to support local school boards.

“We had all this controversy over vaccines, over mask mandates, over school reopenings,” he said. “I don’t see the California Department of Education doing anything to protect school boards.”

While the state superintendent might not have direct control over schools and education policy, Thurmond said he wants to keep the job to finish the task of helping students recover from the pandemic.

“As a legislator, you’re really just one vote,” he said. “As superintendent, while it’s not a direct path to moving policy forward, you have a lot of paths to be creative.”