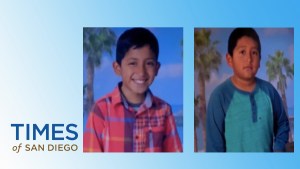 Emmanuel Riva, 11, and Yovanny Felix, 10, who died in 2020 when an intoxicated driver ran them down, along with their grandmother and her boyfriend. Photo credit: Screen shot, NBCSanDiego.com

A motorist who struck and killed four people in Escondido, including two children, will spend 25 years to life in state prison.

Ashley Rene Williams, 30, pleaded guilty to charges of second-degree murder and gross vehicular manslaughter while intoxicated in connection with the May 5, 2020 crash on San Pasqual Valley Road.

Deputy District Attorney Laurie Hauf said the victims had embarked on their nightly walk. Camacho wanted to ensure that the boys exercised regularly despite the onset of the COVID-19 pandemic.

While they were on their walk, Williams’ vehicle drifted onto the sidewalk at around 8:30 p.m., plowing into the victims and then into a tree.

Valdez and the older child died at the scene. Medics took Camacho and Yovanny to Palomar Medical Center, where doctors pronounced them dead.

Williams was hospitalized, then arrested about a month after the crash.

Hauf alleged that Williams used difluoroethane or DFE, a gas used in aerosol products, while driving. She also had marijuana and methamphetamine in her system.

According to the prosecutor, Williams also was driving on a suspended license. She had a DUI drug conviction less than six months prior to the fatal crash.

In a statement, San Diego County District Attorney Summer Stephan said, “This is an incredibly tragic case where four innocent people lost their lives. The defendant was on probation from a drug DUI conviction when she made the selfish and deadly choice to get high and drive. While today’s sentence is just, nothing will take away the pain of the victims’ friends and family.”

Williams did not make a statement at her sentencing hearing on Thursday afternoon, but burst loudly into tears upon entering the courtroom.

Norma Espinoza, mother to both boys and daughter to Camacho, said, “I think one day I might forgive her, but I don’t think I’m ready to do that now. It still hurts.”

Espinoza said her sons “were my everything. They were my life.” She also described her mother as her “best friend,” to whom she could go to for guidance on any problems in her life.

Elvia Valdez, Abel Valdez’s sister, said through a interpreter that her brother was a “respectful and humble” man and that “there is nothing that can fill the emptiness that Abel has left.”

Valdez said her brother’s loss has particularly affected their mother, who is “torn apart” by her son’s death.

Brandi Meron Krepps, who served not only as Emmanuel’s teacher but also Williams’ decades ago, said, “As sad as I feel for the decisions Ashley made, justice has to be served.”

In a statement released shortly after the sentencing, Escondido’s Interim Police Chief David Cramer said, “Although this resolution doesn’t erase the tragedy and loss of four members of our community, we hope that justice being served brings some degree of closure and peace to the families and our Escondido community.”