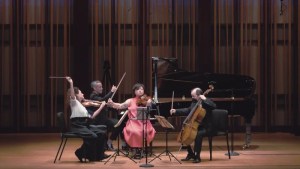 The La Jolla Music Society‘s SummerFest 2022 is bringing a new buzz to San Diego, with wide-ranging creative musical influences to be heard at the Conrad Prebys Performing Arts Center.

Music Director Inon Barnatan and Artistic Director Leah Rosenthal packed the first two weeks in August with many reasons to call La Jolla a center of innovation for residents and tourists alike.

It is all grand musical programming, with lessons from history and culture, much of it absolutely glorious. Though Barnatan’s program may challenge the casual music lover, there is something for all. In a blistering, 10-day period, he draws on influences from Shakespeare and Wagner, evenings with historic celebrations of Kurt Weill, a weekend of great French composers, and then Vivaldi’s brilliant Four Seasons.

And there is always help in understanding because once again the festival has sent along advance program notes from the irreplaceable Eric Bromberger, providing guideposts for every performance.

When vocalist Robin Tristchler couldn’t get a visa, festival planning was updated with a new page inserted into the program highlighting a beautiful Schubert duet with Alexi Kenney on the violin and Francesco Piemontesi at the piano. Kenney told the audience he had first learned his part when he was nine years old and he loved playing it, which could be seen as obvious from a performance of exceptional grace.

For one wanting to go even deeper, dozens of free afternoon rehearsals, artist encounters and prelude lectures add to festival excitement. This was particularly so when New Yorker music critic Alex Ross took to the podium in the afternoon of Aug. 11 to explain “the Wagner Effect.” Ross explained to a large, attentive encounter audience that divergent views about the German composer are still being sorted out more than a century after his death.

Barnatan acknowledged the challenge of preparing for his own performances while managing the summer’s dynamic lineups. Still, patrons gave repeated standing ovations to this world-class pianist after a masterful rendition of Ravel’s Piano Trio in A Minor, and when he was joined by Imogen Cooper in Schumann’s Six Canonic Etudes for two pianos.

And there was a wonderful and unexpected trumpet performance by Ellen Shinogle playing with five other artists in the Septet in E-Flat Major by Saint-Saens.

A friendly observer noted that working as a critic covering a musical evening might detract from enjoyment. That idea turned out to be incorrect when the Festival Chamber Orchestra played Vivaldi’s Four Seasons featuring violin leads by Tessa Lark, Liza Ferschtman, Alexi Kenney and Stefan Jackiw. They were backed up by another ten musicians, including cellist Sterling Elliott and Angie Zhang on the harpsicord. This was one of many opportunities to be wowed while also being a respectful student and diligent reporter.

Later a special treat was provided by Giuseppe Ciuffa, who has signed a five-year contract to provide his renowned brand of culinary delight for festival attendees.

Many more musical events are scheduled for the last two weeks of the festival, including a finale on Aug. 26. In the meantime, enjoy!