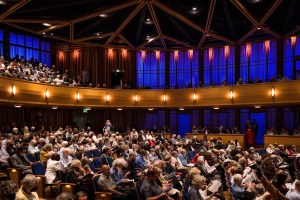 One could hardly imagine what the greatly respected and especially creative Inon Barnatan would summon for the finale of SummerFest 2022 on the night of Aug. 25 and why that evening’s program would be titled “Metamorphosis.”

The entire four-week festival, from late July to near the end of August, followed a theme of “innovation and influence,” with musical ideas drawn from history, from our own time and from beyond.

On a few earlier evenings in late August, SummerFest had reached way out into the solar system and down to earth, as the festival drew on Gustav Holst’s 1925 Planets, while also devoting two evenings for the music of Caroline Shaw, the youngest recipient of the Pulitzer Prize in music.

Shaw presented her stories, poems, vocalizations and viola performance to bring attentive audiences into her contemporary inspirations, particularly for a composition called Microfictions in which she was joined by the magnificent Miro Quartet.

In a concert appropriately named “New Wine, Old Bottles” there was an evening featuring the music of French pianist/composer Jean Francaix, redoing a Schubert Octet, followed by the world premier of 34-year old Chris Rogerson’s ‘Til It Was Dark, in another intriguing quartet.

During SummerFest typically more than 70 rehearsals, workshops and artist encounters are free for all.  Festival ticket holders may also access live “preludes,” but even those are available later without charge, all at the La Jolla Music Society’s website. An example, on the stage of the Conrad Prebys Music Center, was a prelude on the last night of the festival, a fine performance by the Pelia Quartet of Maurice Ravel’s String Quartet in F Major.

Then came the finale. First was what program annotator Eric Bromberg termed a “witty arrangement of one of the best-loved works in the orchestra literature,” Richard Strauss’s Till Eulenspiegel’s Merry Pranks, a short charming opening piece.

Dramatically, this was followed by Metamorphosen, a Study for 23 Solo Strings, the 1945 composition also by Richard Strauss. This grew out of the composer’s sense of the annihilation of German culture but turned back to Beethoven.

After intermission, what throughout SummerFest 2022 has been promised as “musical influence” came to further view. In a rapturous closing, the SummerFest Chamber Orchestra roused the audience to standing ovations with a sense of fulfillment for four weeks of creativity.

Seventeen string musicians amplifying what had been a String Quartet in D Minor, Death and the Maiden, by Franz Schubert, performed the arrangement for string orchestra by Gustav Mahler.  In this 40-minute composition could be heard the influence of “one great composer’s thoughts on another.”

How much more could a chamber music lover expect? Particularly welcome was the announcement, in the festival’s closing hours that Barnatan had signed a three-year extension as SummerFest music director, through September 2025.  Based on the brilliant program this summer, patrons may expect new challenges and new surprises in years to come.   Innovations, indeed!

Barry Jagoda, a La Jolla resident, was an award-winning journalist at NBC News and CBS News who later served in the White House as a media assistant for President Jimmy Carter. His new book about the Carter years is Journeys With Jimmy Carter and Other Adventures in Media.