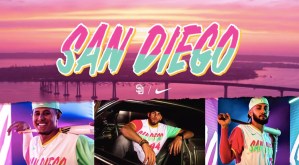 Major League Baseball launched its “City Connect” uniforms last year and caused a bit of a fashion splash. Now the Padres get to join in.

The Friars became the seventh team this season to unveil their special unis, which combine a shout out not only to San Diego’s SoCal vibe, but also its location near the border with Mexico.

The uniforms – like every City Connect design, a collaboration with Nike – display rainbow sherbet-like colors of pink, yellow and green on the sleeves, logo and number.

The Padres emphasized the vibe in the video to promote the uniforms, nabbing skateboarding legend Tony Hawk no less for the introduction, with Santana’s “Oye Como Va” providing the soundtrack.

“Listen to the rhythm,” Hawk said. “That’s what San Diego’s all about.”

The @Padres City Connect jerseys are here to bring the heat. pic.twitter.com/yaETuLdh8I

See the boys in action in the uniforms Friday, according to MLB.com, against the San Francisco Giants.

ESPN ranked the City Connect designs, with the Padres rounding out the top 5. The verdict: “The Padres and Nike did the right thing in trying to tap into Mexican culture in Southern California and executed it well.”

The team trailed the Colorado Rockies, Chicago White Sox, Miami Marlins and Washington Nationals in the ESPN review (but the Padres left the Dodgers in the dust – L.A.’s City Connect unis came in dead last).

The other teams that revealed their City Connect uniforms this year: the Rockies and Nationals, Houston Astros, Kansas City Royals, Los Angeles Angels and Milwaukee Brewers.