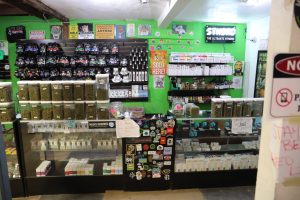 Interior of a marijuana dispensary in Rainbow that was later shut down by the sheriff’s department. Photo via @SDSheriff Twitter

Language for a measure on the November ballot taxing retail marijuana businesses in unincorporated areas of San Diego County was approved Tuesday by the Board of Supervisors.

The board voted 4-1 for language that includes calling the measure “a bipartisan solution to advance a safe, regulated, and legal adult cannabis market in San Diego County.” Supervisor Jim Desmond voted no.

Changes to the language approved Tuesday included adding that a majority of the board urged a yes vote; appropriate edits to the written argument included in the official voter information guide; approving any other supervisors be additional co-signers to the written argument, along with the measure’s co-authors, board Chairman Nathan Fletcher and Vice Chairwoman Nora Vargas; and delegating authority to one or two supervisors to write and sign a rebuttal argument if an opposing argument is submitted.

The board voted 3-1 in June to place the measure on the November ballot. The board previously approved a draft resolution calling for a 75-word ballot question.

Five marijuana operations are allowed to operate in San Diego County — three in Ramona and one each in unincorporated areas bordering El Cajon and Escondido.