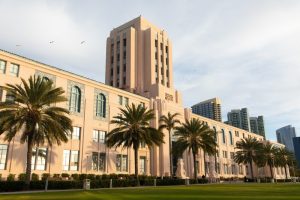 The San Diego County Board of Supervisors Tuesday unanimously approved a $7.35 billion budget for the 2022-23 fiscal year, including $200 million in additional funding requests.

Part of the increase will go toward hiring more county employees, wildfire reduction efforts, and park or community center projects.

Board Chairman Nathan Fletcher said budgets aren’t just buckets of money, but “a reflection of values,” which include better public safety and behavioral health services, sustainability, and more affordable housing.

Helen Robbins-Meyer, county administrative officer, said county staff has spent the last six months putting together “what I think is our best budget ever.”

Robbins-Meyer said that while advancing both community and county values, “this is a fiscally sound, balanced budget that maintains prudent reserves.”

According to a release from Fletcher’s office, budget highlights include:

— an additional $71.8 million and 115 new positions for the ongoing transformation of the behavioral health system, moving from crisis response to prevention and continuous care model;

— a $10 million increase to help people experiencing homelessness by working with cities to fund shelters and places for people to stay;

— over $130 million for health care in county jails;

— an additional $2.2 million to protect communities and reduce wildfire risk in unincorporated areas through roadside vegetation management and fire breaks;

— 100 new positions for services including Calfresh and Medi-Cal;

— 60 new positions for in-home supportive services for older adults and people who are blind or disabled; and

— nearly $60 million for environmental improvements, including $40 million to address stormwater, $16.3 million for the Multiple Species Conservation Program, and $3.4 million to improve the Tijuana River Valley.

In early May, the county released its recommended $7.1 billion budget, with significant investments in mental health, homelessness, equity, racial justice, and climate change.

The budget called for adding 1,000 staff across stated “priority areas.”