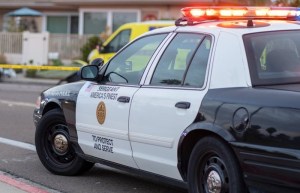 A man suspected of trying to kill three strangers — including a 72-year-old blind man — in an unprovoked stabbing rampage in Mission Valley was behind bars Wednesday and facing a slate of criminal charges.

James Anthony Thomas, 35, allegedly attacked the sightless septuagenarian from behind as the victim was walking with his cane in the 2000 block of Camino Del Este shortly after 5:30 p.m. Tuesday, according to the San Diego Police Department.

After allegedly stabbing each of the two men and the woman repeatedly, the suspect fled. Paramedics took the victims to a trauma center for treatment of extensive injuries, including a punctured lung suffered by the woman and a skull fracture and brain bleed sustained by the older man.

“Initially, the victims’ injuries were so serious the SDPD Homicide Unit responded to the scene,” Sharki said. “After receiving emergency medical treatment, all three victims are expected to survive.”

Aided by a sheriff’s helicopter crew scanning the area from above, police found the suspect on a bicycle path near the scene of the assaults and took him into custody.

Thomas, who was the subject of an unrelated warrant at the time of his arrest, was booked into San Diego Central Jail on suspicion of battery, elder abuse, assault with a deadly weapon, resisting arrest and three counts of attempted murder. He was being held on $75,000 bail pending arraignment, scheduled for Friday afternoon.