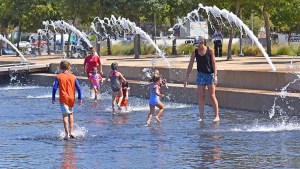 High temperatures will keep Southern California baking all week long and into next weekend, prompting the National Weather Service Sunday to issue a heat advisory for the region.

“Days will be slightly hotter and nights a little warmer, with the resulting heat risk sufficient for a heat advisory for Monday through Wednesday,” the NWS said.

The advisory runs until 8 p.m. Wednesday, but could be extended as the current forecast calls for high heat through next Sunday in several areas.

It's a cloudy start to this Sunday for the coast and valleys, as a deep marine layer has spread all the way to the slopes of the mtns

Today will be the coolest day of the week, as we are in for a warm-up mid to late week.

Thanks to HPWREN for the view from Otay Mtn! #cawx pic.twitter.com/brSv8TAXOO

The San Diego County deserts are expected to see highs near 110 degrees through next weekend, with highs in the low 90s in the valley areas.

“Drink plenty of fluids, stay in an air-conditioned room and stay out of the sun,” the NWS stated.

The area was enjoying a respite Sunday before the mercury climbs.

Warming will begin Monday as high pressure builds, the NWS said. By midweek it may be quite hot inland and warmer over coastal areas, despite the sea breezes.

A weak monsoon could return after midweek, but confidence in this pattern bringing any precipitation was low.

Swimming was expected to be hazardous at the beaches due to elevated surf and dangerous rip currents Sunday. A beach hazards statement was issued Sunday until 5 p.m. for San Diego County coastal areas.

High temperatures along the coast Sunday were predicted to be in the mid-70s, around 80 in the western valleys, mid-80s near the foothills, mid-80s in the mountains and 95 to 105 in the deserts, according to the weather agency.

No hazardous marine weather was expected through Thursday.