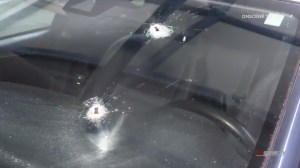 The damaged windshield of a sedan shot at by teens fleeing from police. Photo credit: OnScene.TV

The situation began in the early-morning hours when a resident in a downstairs apartment in the 1100 block of Dennery Road reported that a bullet came through the ceiling from an upstairs unit, according to OnScene.TV.

Officers found that he had been grazed in the leg and determined that there had been a party upstairs with teenagers in attendance. Others at the party told police that people scattered after the gunfire.

Officers spotted two likely suspects – described only as Latinos between 15 and 16 years old, one thin, the other with long hair – and started to pursue them, but lost the duo in the large complex.

A few minutes later, the teens were reported to have shot at a sedan going northbound on Dennery.

The bullets struck the car’s hood and windshield and hit both the female passenger and the male driver, her boyfriend.

He drove to Sharp Chula Vista Medical Center for help, while summoning police. The female victim was sent to a San Diego trauma center for further treatment, but ultimately it was found that both victims suffered graze wounds, the woman to her cheek.