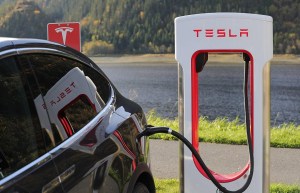 A Tesla EV at a charger. Photo via Pixabay

The California Air Resources Board is set to vote on Thursday to approve regulations that would require all new vehicles sold in the state by 2035 to be either electric or plug-in electric hybrids that could also have gasoline engines.

Electric carmaker Tesla is calling for a faster route to all electric, but a trade association representing other auto makers said the regulations as proposed would present a tough manufacturing challenge.

Gov. Gavin Newsom first announced the plan to phase out vehicles that run on gasoline by 2035 in September 2020. Once the board votes to approve the new rules, which will set yearly rising zero emission vehicle rules starting in 2026, the Biden administration must approve it before it can take effect.

California is ahead of federal vehicles emissions rules, which currently only extend to 2026 and do not set yearly requirements for zero emission models. More than a dozen other states have adopted California’s zero emission requirements.

CARB’s new regulation would allow automakers to sell up to 20% plug-in hybrids (PHEVs) by 2035.

Tesla, which produces only all electric vehicles, said in a July 26 filing to CARB that the board should require 100% zero emission vehicles by 2030 and increase the stringency of the standard by “reducing the use of polluting PHEVs in annual compliance.”

CARB’s proposal sets new tough requirements for plug-in hybrids, which currently must have at least 10 miles all electric range and will eventually need a minimum 50-mile all electric label range to qualify.

CARB projects that 183,000 out of about 2 million vehicles sold in California in 2035 will be plug-in hybrid.

period” and added the rules will be “extremely challenging even in California and particularly in the early years.”