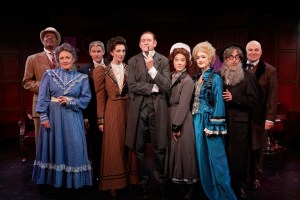 The cast of the world premiere musical, “The Remarkable Mister Holmes” at North Coast Repertory Theatre, Photo by Aaron Rumley

And of course, The Man himself (as created by Sir Arthur Conan Doyle, in four novels and 56 short stories, published from 1887-1927): fiercely intelligent, with extraordinary powers of observation, forensic figuring and deductive reasoning. Arrogant and supercilious. Supremely logical but unemotional and fairly unemphatic. And unequivocally convinced of his rightness and infallibility.

All this — and music! — and much more can be found in the world premiere musical, “The Remarkable Mister Holmes,” making its debut at North Coast Repertory Theatre in Solana Beach.

Director Ellenstein describes it as a cross between “A Funny Thing Happened on the Way to the Forum” and “My Fair Lady” (I’d throw in a couple of Gilbert and Sullivan works), with a touch of Mel Brooks.

To complement the Brooksian Borscht Belt, below-the-belt shtick, there’s even a Rabbi (and a couple of anti-Semites), plus Yiddishisms, and repeated instruction in how to correctly pronounce that guttural, throat-clearing ‘kh’ sound of Yiddish and Hebrew.

There’s even a potential love interest (and a too-little-too-late “I’ve Grown Accustomed to her Face” musical moment of realization on Holmes’ part).

Matching the great detective in smarts and savvy is Watson — not the familiar sidekick Dr. John, but his peripatetic sister, Sheila, whom he hasn’t seen in 20 years. She’s beautiful and insightful (it’s she who identified the religious symbols, out-Holmesing Holmes).

Though she finds Holmes’ skillset “Impressive,” as one song has it, she thinks she has every right to be next to him every step of the way, to help solve the string of killings of religious leaders.

The cast of nine is superb, and their quick changes of character and costume make it appear that there are scores more. The wonderful wardrobe and wig array (costumes by Elisa Benzoni) is mind-boggling in itself.

The set (Marty Burnett) is equally malleable, with windows and walls giving way to closets and cabinets and backdrops for 1890s London projections.

There’s cross-dressing and gender-bending, and no comic stone is unturned.

The running-time (2¾ hours) could be trimmed — not every new character needs to have a song, and the titular opening doesn’t require quite that many deaths to introduce the world-renowned central character. The unnecessary “intermission” song could go, too. The creators are still tinkering and trimming.

But still, the show moves fleetly, and there’s so much to like about it that time is not an issue. Lots of Sherlock lore for devotees. And many sharp and witty new additions to the numberless adaptations of Conan Doyle’s work.

All the wonderful performers are expert singers, accompanied by an excellent four-piece offstage band, conducted by musical director/pianist Ron Councell.

Sharon Rietkirk is lovely, charming, sassy and irresistible as Sheila Watson, and Bart Shatto is absolutely pitch-perfect as Holmes. (She describes his manners as “on the spectrum between psoriasis and mange.” His social skills always did seem a little bit “on the spectrum,” as they say these days).

Andrew Ableson is funny in his every role. Phil Johnson shows off his silly and slightly more serious sides (and his newly shaved head). It’s always a treat when Deborah Gilmour Smyth ventures away from her home base of Lamb’s Players Theatre (where she’s been since 1979, currently serving as associate artistic director), to display her prodigious comic and vocal talents. Katie Karel, Tony Perry and Katy Tang add spice to the mix.

It’s a delightful ensemble, excellently directed by Ellenstein, with musical staging by Jill Gorrie Rovatsos, lighting by Matt Novotny and sound by Aaron Rumley. The miking was inconsistent the night I was there, sometimes enhancing the vocals, sometimes muffling them. And this is one show in which you don’t want to miss a cunning, crafty lyric.

Don’t even bother trying to unravel all the mysteries on your own (I kinda got lost in the maze). Just sit back and enjoy it all gloriously unspooling in front of you.

This show has legs; I predict that it’ll be moving on and moving up soon. Don’t miss it while it’s offering San Diego a first look.