‘Thor: Love and Thunder’ Fends Off Challengers with $46 Million 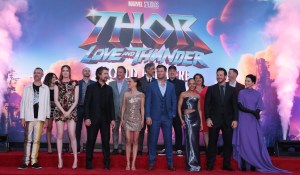 The cast of “Thor: Love and Thunder.” Photo via @thorofficial Twitter

“Thor: Love and Thunder” held onto its spot atop the box office in its second weekend in North American theaters, taking in $46 million, according to industry estimates released Sunday.

The latest edition of Marvel’s four-film franchise, which stars Natalie Portman alongside Chris Hemsworth, beat out “Minions: The Rise of Gru,” which grossed $26 million in its third week, Comscore reported.

“For over a decade you have shown us that Thor is still worthy. We’re humbled and grateful to all of you who have been part of this incredible journey. We can’t wait for you to see #ThorLoveAndThunder in theaters July 8th

“Where the Crawdads Sing” opened in third place with $17 million Friday through Sunday at theaters in the United States and Canada.

“Top Gun: Maverick” continued its amazing run, pulling in another $12 million in its eighth week for a cumulative domestic total of $617 million.

“Elvis” was fifth with $7.6 million in its fourth week.